Leon Edwards claims he was just having some banter with former UFC welterweight champion Tyron Woodley when he mentioned his music.

Edwards recently joked about how Woodley had his rap career to fall back on once he defeats him in the UFC London headliner on March 21.

“The Chosen One” didn’t take too kindly to that. 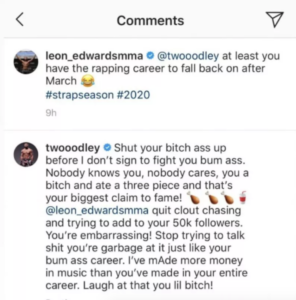 In addition to responding to the now-deleted post, Woodley would also send direct messages to Edwards before proceeding to block him.

“I put out a meme [about his rap career] on my Instagram and he DM’d me and everything, and then he blocked me,” Edwards told MMA Fighting’s Eurobash podcast. “He blocked me and everything – he took it really personal because I brought up his sh*t music. To me it’s all banter, he’s taking it seriously, but there’s nothing much you can do. He’s saying, ‘I’m angry now,’ and blah, blah, blah, but he’s still going to come in and do the same thing. He’ll throw a few kicks, a few takedowns, there’s only so much you can do. I’m just looking forward to the fight, it’s going to be a good one.

“I put the meme up and I can’t remember what it was. I deleted it and he blocked me after. I don’t know [the DM] was something like, ‘You punk-ass, I’m going to knock you out,’ and blah, blah, blah…and ‘I make more money than you’…just a bag of nonsense, really. I deleted it after and then he blocked me. I think I really got on his nerves…but he is a crap rapper…everyone knows he’s sh*t! I don’t understand what the issue is.”

Given how sensitive Woodley was about Edwards bringing up his music, “Rocky” might just plan on going one step further — walking out to Woodley’s music at UFC London.

“I might walk out to his music – that might be funny,” he added. “That would be a good little dig at him before the fight! We’ll see.”

All jokes aside, however, Edwards does acknowledge that the former champion is his toughest test to date. That is why he is preparing for the best Woodley — the one who ended up becoming champion after knocking out Robbie Lawler.

“On paper, it’s my toughest fight, but we’re not going to know until we get in there,” he explained. “I’ve been there before where I thought I was going to have a tough fight, and I’ve got in there and it’s been easy, so we’ll see.

The winner of the fight could wind up challenging for the UFC welterweight title next. In Edwards’ case, it’s guaranteed.

Khabib: It's 'Irrational' To Get Paid $100mil To 'Beat Up That Idiot' McGregor Again
Read Next Post →
Click here to cancel reply.