Don’t expect Ubereem to fight in Strikeforce on April 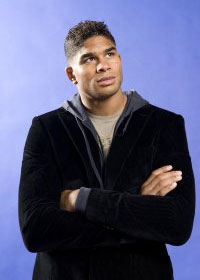 Ubereem is a good friend to have if you ever find yourself in the trajectory path of an asteroid. Chances are he could step right in front of it and you can watch while he absorbs the impact on his pectorial muscle. Ubereem will then lower his hand for you to jump in, throw you on his shoulder and both of you can fly together in space and star in some early 90s Japanese anime. We all love our Ubereem just as much as everyone else does (probably a lot more than people who will comment on this story), but all we want for Christmas is to see Ubereem defend his Strikeforce Heavyweight belt in 2010.

HeadKickLegend had a conversation with Bas Boon from Golden Glory earlier today and Bas said Alistair will defend his title in 2010 against Fedor…but not in April. No way. If you believed Ubereem would fight in April then you are the walking embodiment of your very own April Fool’s joke. Actually we all are. After his Dynamite!! 2009 fight with Fujita, Ubereem has one fight left on his K-1 contract, a fight that will occur sometime in the Spring of 2010. Fedor’s next fight is scheduled to go down April 2010 on CBS (with Dan Henderson riding shotgun on the same card). Bas Boon explicitly told HeadKickLegend, Alistair will not be on that card. Bas also had this to say:

“Prepare America, Alistair is coming, 2010 will be the year of the Dutch cyclone, demolition time in the US!”

Maybe Bas should have said only half of 2010 will belong to the Dutch cyclone. The other half will probably belong to me drunk-dialing my ex and telling her she still has my LRG hoodie. [Source]