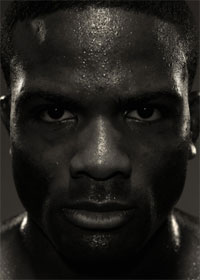 Raise your hand if you’ve ran an unsanctioned underground fight club entirely in your gym in Palm Springs, Florida. If your name isn’t Din Thomas then you should slap yourself in the face and give me everything in your kitchen (including that six-pack you bought for this weekend). Din Thomas is the friggin man. I know that expression is used more than ‘Machida is elusive’, but it’s true. Din Thomas is the friggin man. Who else has a DVD where they teach you 1,001 submissions in a 52 volume set. I bet you didn’t even know the human body was capable of 1,001 submissions (it’s cool, I didn’t either). When Chris Brown was accused of assaulting Rhianna earlier this year, Din Thomas got on the mic after his win over Gabe Lemey and called out Chris Brown. Dude announced in front of an audience of drunk fans that it was wrong to beat chicks and that if Rhianna ever needed his assistance, he would readily be available. See, I told you Din Thomas is truly the friggin man.

We ran into Din when we covered The Ultimate Chaos, we even took pictures of him in his undies. His opponent was supposed to be Javier Vasquez but due to some incompetent confusion he wasn’t allowed to fight (matter of fact, no one really knows exactly what happened). Din Thomas is signed to Shine Fights, the same organization that recently signed the former WBC and WBA welterweight champion Ricardo Mayorga. Not only is Din Thomas calling out Mayorga but he wants to retire the dude on the ground or standing.

”Ricardo Mayorga just signed to fight in Shine. I think he is afraid of me. If he does accept the fight I will put him into retirement and send him back to his fruit stand in Nicaragua. He will be wearing a straw hat, smoking cigarettes, and selling bananas once and for all. This is MMA and I will beat him standing or on the ground. I will let him pick how he wants to lose his first MMA fight.”

Hey, nothing is wrong with rocking a straw hat…just ask those evil flying guys in Big Trouble in Little China. [Source] 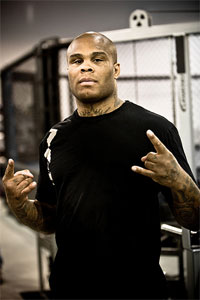