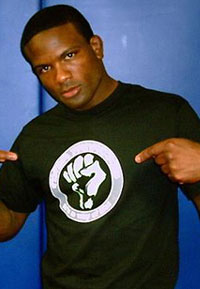 Some conspiracy theory floated around The UG a few weeks ago regarding the altercation Din Thomas had with Ricardo Mayorga at the Shine Fights press conference in New York, NY. You’ve seen the clip and probably remember the unbelievable smack-talk between the two. At one point in the conference, Ricardo ‘karate chops’ Din in the neck and then security quickly jumps in to prevent any further…karate chopping. If you check out the clip, Din falls back and seems to stumble to get back on his feet. Of course, this led to UG conspiracy theorist, AngusWilson, to come up with his own scientific breakdown of the ordeal:

You see, a blow to the neck works differently. If you get hooked on the jaw, there’s an instant effect, but if you receive a hook on the side of your neck, the arteries get compressed and the effect only happens a second or two later.

He manages to put his hands up but then starts stumbling. Fits with a neck knockout, delayed reaction. The one thing here is that there was a table right behind his leg, and the bouncer was possibly blocking his other leg so Din may have stumbled backwards for these reasons.

Next he appears to start a takedown. This is what most people are saying, but it’s not what really happens. Look at his face. It’s slumped, looking downwards, motionless for about a second and a half. He’s not totally out, but he’s not there, and the bouncer’s holding him up. Then Din starts pushing for that takedown and the bouncer pushes him back. Now is when Din really wakes up, but he’s still very slightly (but noticeably) wobbly.

Here’s the clip in question in all of it’s animated .gif glory It seems like somewhat of an unbelievable premise, until you methodically look at the clip to see what transpired. Sure I can see how he was possibly rocked, perhaps if Ricardo Mayorga trained in a Shaolin Temple to perfect his ‘qi energy‘, but the entire thing feels like you need to have your tin-foil hat on to fully buy into. Today, I met up with Din Thomas and brought up the UG conspiracy theory. Here’s what he had to say: