There were some questionable scorecards at UFC 262, some of which were called out by Daniel Cormier.

MMA judging is recurring theme of controversy inside the Octagon.

Win or lose, unanimous or split decision, someone will always have something to complain about when it comes to the hands of the judges.

Take it back to last weekend for example. UFC 262 along with ONE: Dangal had some questionable calls. Katlyn Chookagian vs Viviane Araujo and Lando Vannata vs. Mike Grundy were closely contested and some thought the wrong hand was raised. Bi Nyugen’s split decision victory over Ritu Phogat in ONE Championship also made some waves with its “flip-the-script” decision.

Daniel Cormier also wasn’t much of a fan of the scoring last weekend.

While the high-stakes main event between Charles Oliveira and Michael Chandler didn’t go the distance, the scores for round 1 did not sit well with the former UFC Champ-Champ. 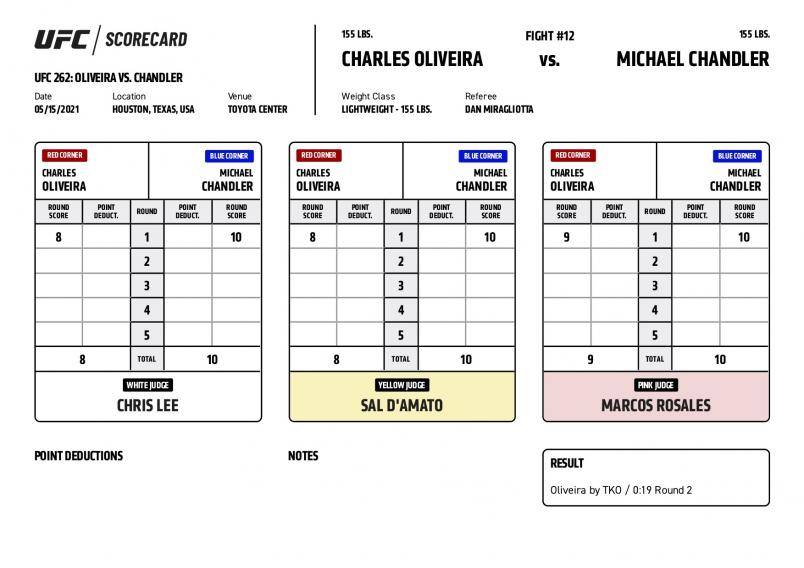 In short, Oliveira would take Chandler down and get ahold of his back, working for a rear-naked choke.  Chandler was able to spring up to his feet after being in a dangerous position by the BJJ master. After that, ‘Iron’ Mike knocked down the Brazilian and almost stopped Oliveira, but he would recover and rally back. The clear verdict was that Chandler won the first round but it was a competitive one nevertheless.

Judges Chris Lee and Sal D’Amato saw things a bit differently however. The two judges would score the premiere round as a completely dominant 10-8 for Chandler. Marcos Rosales would see it as 10-9, which ‘DC’ would agree with.

Cormier was infuriated to say the least. He didn’t understand the criteria or the reasoning for why Lee and D’Amato scored the first round as a 10-8 for Chandler, who was soon to fall to strikes in the upcoming round.

“Michael Chandler won that round,” Cormier said on DC & Helwani.  “But when Charles Oliveira gets you down, takes your back, does good things in the round, how in the world are you scoring that 10-8 as a judge?”

To back up his point, DC glances back at one of the most dominant beatdowns in recent UFC history: Glover Teixeira vs Anthony Smith.

“If you recall, when Glover Teixeira beat Anthony Smith and Glover Teixeira busted his tooth out of his mouth, that was a 10-8 round. How in the world can you judge these two rounds the same? One was an absolute beating, and the other was a competitive round.”

The Lightweight title fight between Oliveira and Chandler wasn’t left in the hands of the judges, but what if it had been? Cormier explores the possibility and how the beginning scores could have affected the Brazilian in the long run.

“When you take the responsibility (as a judge), you have to be very careful,” Cormier said. “Because they were about to mess up that fight. Had that gone five rounds, you would’ve had Charles Oliveira down two rounds after a very competitive round. You are taking responsibility for people’s livelihoods and their careers. You have to watch carefully and truly understand what you are watching. It’s crazy that they scored it 10-8.”