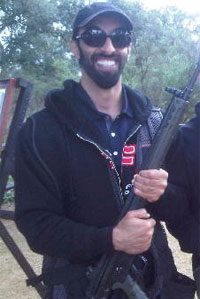 So we found out that UFC 112 will be in Abu Dhabi last month, and then we found out that BJ Penn will probably end up fighting there. Today (actually yesterday), we learned that Sheikh Tahnoon has recently bought a minority percentage of the UFC, thereby making him a partial owner. Now before you go on assuming he’s just another oil billionaire (which he is), the dude really knows his stuff when it comes to Brazillian Ju-Jitsu. Tahnoon holds a blackbelt under Renzo Gracie and he’s recognized as the founder of the No-Gi Submission Olympics, otherwise known as Abu Dhabi Combat Club (ADCC). Besides that, he’s the son of former Arab Emirates President Sheikh Zayed bin Sultan Al Nahyan (whose fortune exceeds $24 billion according to Forbes Magazine). Oh, and the dude likes to hunt with really big weapons.

We’re not sure how this partnership is going to turn out, or how Sheikh Tahoon feels about Arianny Celeste’s choice of fight night attire, but the UFC has just landed a cash-cow that makes Strikeforce sugar daddy, Donald Trump, look like Katt Williams from Friday After Next. [Source]