It doesn’t take much to get us excited when one of our writers steps inside the octagon to put on a show for millions of people across the planet. Whenever we’re forced to compete in MMA, we just give DaMarques Johnson a call and he usually takes care of whatever altercation arises. DaMarques Johnson is an official staff writer on MiddleEasy.com, and over the years he has contributed a hefty amount of amazing to the site, and tonight at UFC: Fight for the Troops 2, D-Zilla contributed another L to Guymon’s record, via injury from a body triangle.

After the fight, Damarques said ‘who likes foreplay with no orgasm?’, but he was really insinuating that the red MiddleEasy monster was seconds away from giving birth to everyone who watched the fight live on Facebook, including men. Early in the fight, Guymon attempted to takedown DaMarques, but it was flipped and Johnson eventually mounted Guymon and, well — the rest of the fight belonged to Darkness. Darmarques eventually finished the fight with a nasty body triangle that warranted a verbal tap from Guymon and another win for DaMarques Johnson and MiddleEasy.com.

Continue to begin your frate tranery through the UFC welterweight division in 2011, you have our complete approval.

Update: Minutes after the fight, DaMarques Johnson sent this picture out. Well done, D-Zilla, now wipe those brain cells clean. You deserve it. 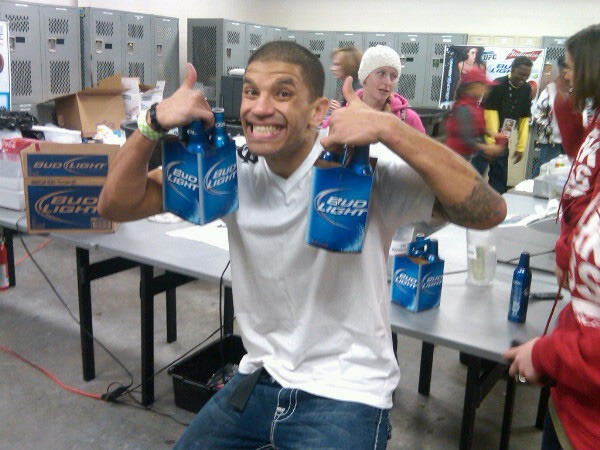