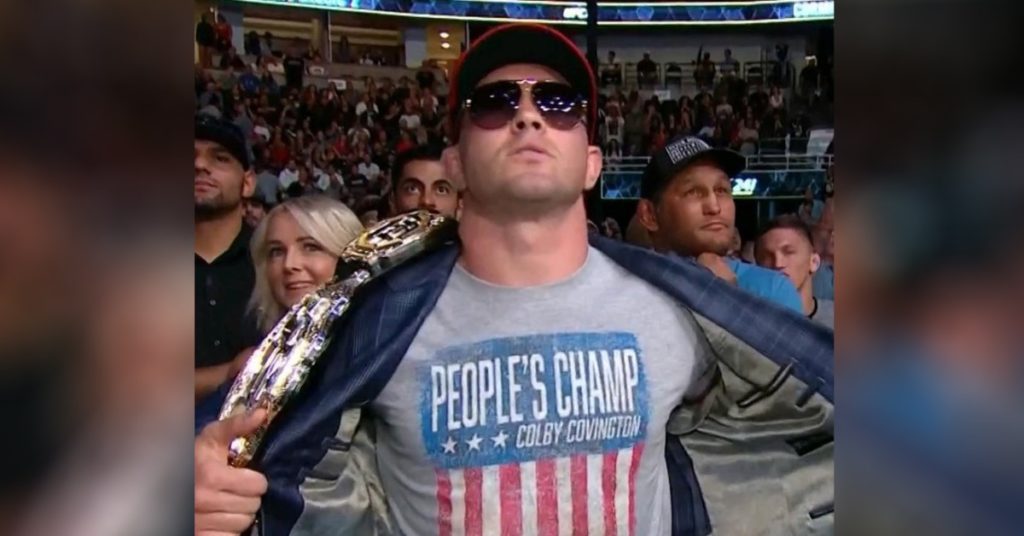 Covington Claps Back At Celebrities

Colby Covington could only laugh at the celebrities who took pleasure in his defeat to Kamaru Usman back in December.

Covington suffered a fifth-round TKO loss to Usman in their UFC 245 welterweight title fight. Given the heated and tense buildup leading up to the bout, many took joy in the polarizing and outspoken Covington suffering defeat.

Rapper 50 Cent and actress Rosie O’Donnell were notably among the many who mocked the former interim welterweight champion.

Although Covington didn’t speak much following the defeat — other than his post-fight tweet about referee Marc Goddard — it was hard for him not to miss what celebrities such as 50 Cent and O’Donnell were saying about him.

Covington already responded to 50 Cent earlier this month by challenging him to a celebrity boxing match. He decided to reiterate the challenge.

“50 Cent? The guy was hit eight times and that’s his claim to fame ‘oh I was hit eight times and that couldn’t put me down’. If he gets hit one time by me, he’ll never get back up,” Covington said. “There’s one guy who got his jaw wired shut and it wasn’t me. It was 50 Cent. He’s a little b*tch. I want to fight 50 Cent next. I think we should do a celebrity charity boxing match. I’ll put up $1 million of my dollars and it’s going to go straight to the troops. He’s a broke b*tch so he probably doesn’t have a million dollars but he can go as one of his f*cking sponsors to put it up and we can do this.

“I want one hand tied behind my back. I will let him pick which hand to tie behind me back. Left or right, whichever one you want, 50. Be a f*cking man. You want to talk sh*t about me on Instagram and you want to talk sh*t out there? What did you ever beat, 50 Cent, besides your defenseless spouses in Hollywood. You ain’t beat sh*t motherf*cker. I’m a real f*cking fighter. I’m the best f*cking fighter in the world.”

As for O’Donnell, Covington wasn’t letting her go off the hook either.

“The only thing she’s fighting for are all the women who are leaving her because they’re trying to come to me and they’re sweating me on Instagram. So f*ck Rosie O’Donnell, that fat pig.”

When it comes to fighting, Covington is targeting a summer return and is campaigning for an instant rematch with Usman.