Amidst the recent allegations levied against him, Conor McGregor has been tweeting and deleting things that have caused concern. Now he addresses these concerns, as well as the case against him, in his most lengthy statement since he was accused.

Over the weekend, it was reported that Conor McGregor had been taken into police custody, and questioned in regards to accusations that he exposed himself to a female patron at a bar in France. He was released without charges, although it seems authorities are awaiting physical tests and potential camera footage. In the wake of this, he got into a brief verbal dispute with someone on Twitter, where he sent then deleted comments about his mental health. These remarks had some concerned that he could be contemplating self harm, given the nature of his words. 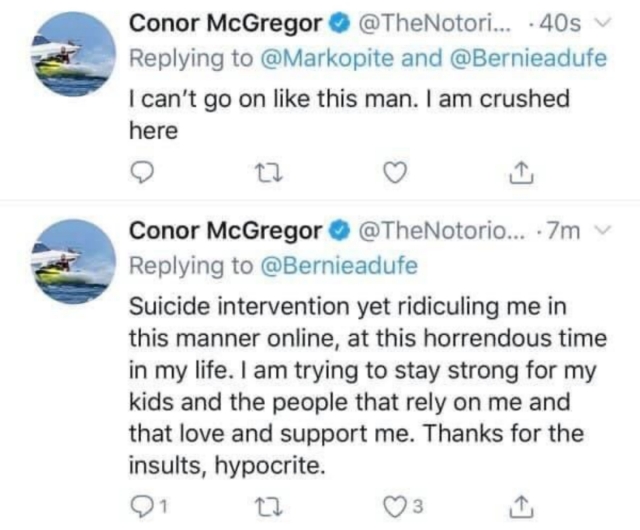 Now for the first time since this news was revealed, Conor McGregor has issued a statement about the situation. A screenshot was obtained by Harry Williams, of a post to his personal Facebook page, where the Irishman dismissed concerns over his mental health. Moreover, he addressed the accusations against him, both past and present, saying that he is innocent and the evidence will soon prove as much.

“I will never kill myself no matter how many wish for it,” McGregor said. “Try set me up all yous f—ing want over and over and over the truth will always set me free! Be it baby father claims, rape, indecent exposure, bulls–t WhatsApp group s–t. You f—ing name it. Never will I fold! The truth is the truth and it gives me wings! I know my character! God bless DNA! God bless Cctv! God bless Eye witness! God bless the truth! The truth is power! I am free! Never will a dime be paid to anyone coming at me with vicious lies! Not now not f—ing ever! I will fight! And I am only beginning my fight! All these past incidents you will see! They will not be forgotten! I will not allow these people to just accuse me and then disappear into the dark to attempt to ruin someone else life! No f—ing way!”

Conor McGregor responds to the allegations made against him and addresses the notion of dark thoughts. pic.twitter.com/DU1NeTH2ws

What do you make of this statement from Conor McGregor?

Dana White Responds To Navid Afkari's Execution After Attempts To Save His Life
Read Next Post →
Click here to cancel reply.