Check out the completed ONE FC: Return of Warriors fight card

One day Victor Cui, CEO of ONE FC, will take my advice and name an upcoming event ‘ONE FC: Enter the 36 Chambers.’ Until that day, I’ll just have to habitually play Wu-Tang Clan in the background while I watch Pride FC Shockwave 2006. If someone would splice the entire ‘Wu-Tang Clan Forever’ album with Pride Critical Countdown 2005 then we would happily host it on MiddleEasy until ZUFFA attorneys slam on our door. It’s worth a try, anyway. After watching the Wu-inspired ‘UFC: Da’ Mystery of Chessboxing,’ it’s clear that Cynthia Vance is the only person up for the task. Tell her to deliver a copy of a Wu-Tang Clan/Pride FC mash-up directly to my door at some point in 2013. She will be honored on the site for the rest of eternity — or until some ancient culture proclaims the world will end.

Now check out the full fight card from ONE FC: Return of Warriors, going down February 2nd 2013 in Kuala Lumpur, Malaysia. 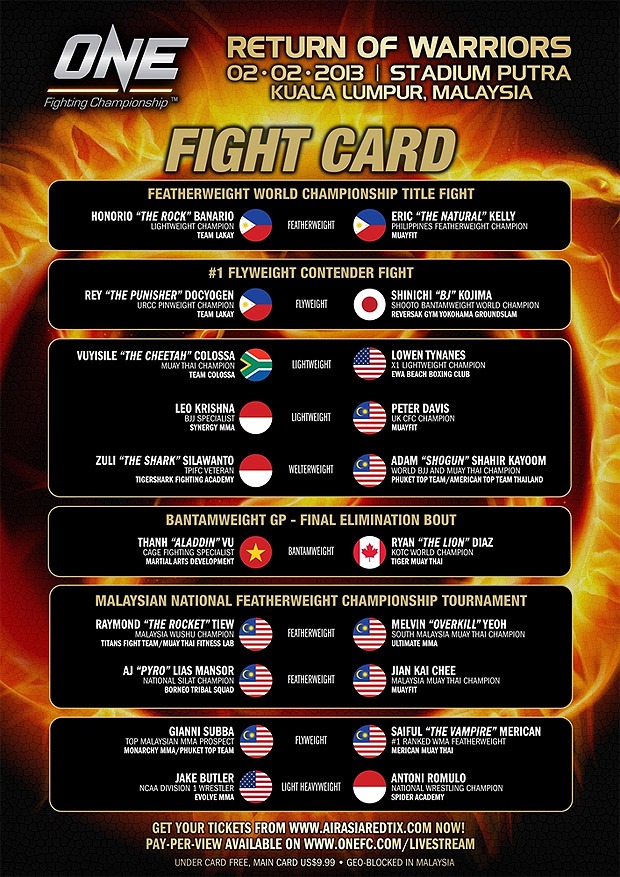 If you're still confused why GSP is fighting Nick Diaz and not Johny Hendricks, Dana White can explain
← Read Last Post