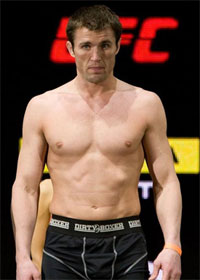 Fear is not the only emotion Chael Sonnen can smell. He can also detect hope, as in “I hope I don’t get smacked in the face by Chael Sonnen”. Chael Sonnen took some time out of preparing for his current bid for Oregon state representative to watch his favorite middleweight perform at UFC 112. In an interview with MMAJunkie, Chael lets the world know how he really feels about Anderson Silva…again.

“There’s people out there that need (to be) beaten up – he’s one of them. And I have a moral obligation to society to beat him up.”

“[Silva] is a dirtbag anyway, whether he went out there and shook hands and was gracious or he didn’t, who cares? I don’t know why sportsmanship needs to be involved, anyways. It’s a fight – go do whatever you want.

Damn, is it just me or does Chael Sonnen look like a really thin version of Jason Guida in that pic? Earlier this year, Chael Sonnen issued a public statement for MMA fans to ‘not buy into the Anderson Silva hype’ and also used the word ‘un-understandable’ in the same sentence. Looks like Chael Sonnen isn’t getting invited to co-host Sesame Street anytime soon. [Source]