Chad Griggs pulls off the upset against Bobby Lashley 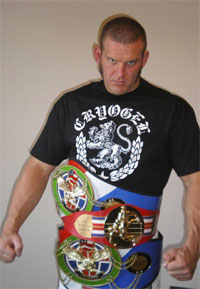 Chad Griggs defeating Bobby Lashley just goes to show you how raw the Tucson Fire Department really is. A full-time fire-fighter just made the guy who many thought would be next in line for a title shot, quit. Done. After opening up a massive gash under Lashley’s eye in the first round, Griggs managed to weather Lashley’s ground and pound in the second, and by the end, the referee called off the fight due to exhaustion from Bobby Lashley.

The athletic commission should look into Chad Griggs’ sideburns. They obviously provided some superhuman advantage tonight. Griggs improves his record to 9-1 with all of his victories coming via submission or knockout. We’re all forced to abruptly rethink whatever hierarchy everyone out there established for Strikeforce’s heavyweight division. Now we may finally get to see Bobby Lashley vs. Daniel Cormier, a bout that would not have happened if Lashley grabbed the W tonight.

Props to Chad Griggs on introducing himself to the thousands out there that didn’t give him a chance to win tonight.