Buffer surprises the world by doing the 360…hopefully 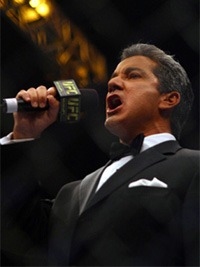 It’s hard to be clever when there arent any brain cells left in your head (compliments of a UFC 100 pre-party). I just tried to explain what the Bruce Buffer 180 was to a cocktail waitress at an airport and then I just realized that…I was trying to explain the Bruce Buffer 180 to a cocktail waitress at an airport. That’s probably the equivalent of her trying to explain the techniques of a french manicure to Mark Coleman.

For those of you who don’t understand the greatness of the Bruce Buffer 180, here’s a brief history. Back in the day when UFC was an infant wetting it’s diaper and puking over it’s bib, the only constant fixtures at every UFC fight was Bruce Buffer and the Tapout crew (RIP Mask). The story goes that Bruce Buffer was announcing a fighter in the middle of the cage and midway through the introduction, he realized that he was facing the wrong dude. In a moment of rawesomeness, Buffer did a sudden 180 degree turn to face the other fighter just as he was about to say his name. When it happened, the Tapout guys just fell out of their chairs laughing at Buffer and still to this day…Bruce says that it was all on purpose.

Now there’s been rumors that Bruce is going to pull a groundbreaking ‘360’ at UFC 100 this weekend. Now the possiblity of a Bruce Buffer 360 is plastered over shirts and…well yeah, just shirts. Bruce Buffer told MMAJunkie Radio that he has not ruled out the possibility of a 360 which may be one of the most akward things you will witness on PPV. Anyone know the over/under on Buffer falling down at about the 240 mark of his 360? [Source] 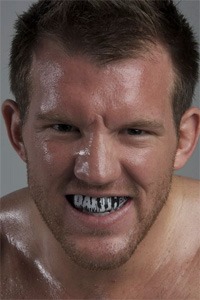