UFC Vegas 12 Results: Bryce Mitchell Defeats Andre Fili By UD After A Back And Forth War (Highlights) 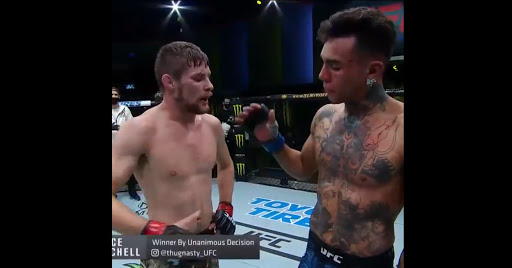 Up next in the co-main event, two of the most exciting featherweight fighters face-off in Las Vegas. The dangerous submission artist Bryce Mitchell (13-1) will test his skills against the thunderous Andre Fili (21-7).

Big left hook lands early for Mitchell, he follows it up with another one. Mitchell shoots for a takedown but Fili defends well. Both fighters land in the pocket. Nice jab lands for Fili  Nice flying knee lands for Fili. He looks to be aggressive and pressure Mitchell. Mitchell lands a right hand and attempts a takedown. Fili defends another takedown and lands a right hand. Mitchell attempts another takedown and gets it using a nice trip. Mitchell transitions to half guard. Both fighters scramble on the ground but Mitchell stays on top. Fili gets back to his feet and lands a big high kick. He denies a takedown and throws Mitchell on the ground as the round ends.

Mitchell lands a leg kick to close a combination. Fili answers with a right hand. Mitchell gets a takedown in the middle of the octagon. Fili manages to get back to his feet but Mitchell takes him back down immediately. Fili reverses the position and stays on top. He lands a big punch before getting back up. Mitchell pressures Mitchell right away and gets him back down. Mitchell gets into the full mount position but Fili gets him back in full guard. Mitchell lands some ground and pound on the ground as the round ends.

What are your scorecards reading after two? 📝 #UFCVegas12 pic.twitter.com/VzWaIxwBBk

Make it 1-0 in the camo shorts 🌾@ThugnastyMMA earns the UD victory at #UFCVegas12! pic.twitter.com/rDLfSoFWjz