Breaking: David Loiseau will fight at UFC 115 in Vancouver 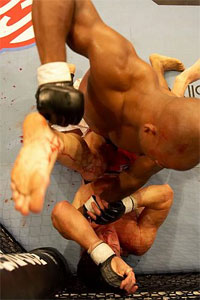 Take that alleged Canadian criminal organization. David Loiseau was scheduled to bang against John Salter at UFC 113 as a short-notice replacement of Nick Catone who was recovering from an injury. Everything was good until the Régie des Alcools, des Courses et des Jeux denied to license Loiseau due to an allegation that he had ties with an organized crime syndicate in Canada. A few days later, Loiseau called Mike Russell of CagePotato to break the news that he was granted a license to fight at UFC 113, but it was too late. Jason MacDonald stepped up as a last-minute replacement and Loiseau was without a paycheck. Being screwed out of a fight based on lack of evidence is not kosher in Loiseau’s book and the dude even plans to take legal action against the commission.

“Man, I honestly can’t believe this happened. It was humiliating. I haven’t slept in three days. I’ve been cutting weight because I was confident this would get sorted out. Now, even though it’s been proven that I’m innocent, my reputation and credibility has been damaged. I’m trying to decide what to do next, but taking legal action against the commission is definitely something I’m looking at”

Earlier today, I received notification from Mirko Mladenovic, the head of the Vancouver Athletic Commission, that David Loiseau has been added to UFC 115 in Vancouver and his opponent will be announced on Monday. David also told Mladenovic that he will donate his fight purse to aid Haitian relief. Congrats to Loiseau for getting booked on the fastest selling UFC event in history.

Update: His opponent is Mario Miranda.