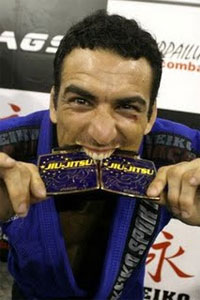 You know how in Avatar the military went to Pandora to harness the energy from that unobtainium stuff? Well Braulio Estima already beat them to it and it looks like he used it solely for purpose of putting people to shame with his Gracie Barra jiu-jitsu. If Braulio Estima ever appeared in a Playstation game, Sony would have to throw a few extra buttons on their controller. Dude is the 2009 ADCC 88-kilogram and Absolute division champion and Shine Fights has just announced Braulio has been signed to a multi-fight deal with the organization in an attempt to put everyone’s BJJ to shame. His MMA debut will most likely be at catchweight somewhere in-between welterweight and middleweight (he usually competes at around 195lbs).

Last year, Braulio Estima offered Brazilian jiu-jitsu lessons for free on CageFilm. I’m not sure if he still does it, but I have a friggin collection of extraordinary tutorials that I will never attempt because I’m too busy telling you guys how The Green Mighty Morphing Power Ranger won his MMA debut. Damn. Perhaps in a moment of spontaneity I will throw on my Jaco shorts, go outside, breathe fresh air…and then abruptly go back inside, drink a glass a water and call it a day. That’s the extent of my BJJ training. Sure I may not be able to prevent an 18-year old car thief from stealing my hatchback with a rear naked choke, but it’s cool. Bobby Green has taught me everything I need to know about the fighting style he coined ‘Hood’, and it involves numerous groin shots (just ask Dan Lauzon). [Source]