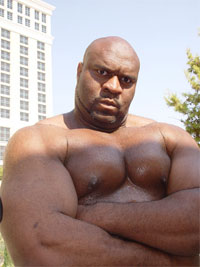 Bob Sapp is packing his gear and heading to the oldest nation-state in Europe to film his role as Ukafa, a war hardened leader of Kushite Tribesmen from the savannas of Kush. Ukafa is Khalar Singh’s second in command, jealous that Singh’s son, Fariq, will one day be warlord (come on, everyone knows that). He obeys his leader but plots the overthrow of his son. He is a mighty warrior and unbeatable in battle…until Conan shows up.

Hopefully, some sort of documentary crew will be following Sapp around the former communist state of Bulgaria as he comes to grips with the fact that Bulgarians nod for “no” and shake their heads for “yes”. That’s wild stuff. Almost as wild as the fact that in the mid-fourteenth century, Bulgaria came under Ottoman rule, which lasted until the Russo-Turkish War. In 1878, Bulgaria was re-established as a constitutional monarchy. Learn something everyday.

Rock on Bulgaria, you may have zero Olympic medals right now, but you have an incoming Bob Sapp. One thing at a time Bulgaria.[Source]