Blast to the Past | Let’s watch some Yoel Romero highlights

If Yoel Romero was crossbred with George Romero we would have the deadliest zombie-killing machine known to mankind. For example: the ankle pick that no one performs better than Yoel — a great move for burgeoning zombie hunters, as long as they are the slow zombies, which is how it would be if the zombie invasion ever really did take place. Just walk up to the zeds and take them down from the ankle, then let your partner finish them with a sledgehammer to the skull. The only negative in Yoel’s case would be the accidental tearing off of the calf and lower leg, but what can you do? Without the crossbreeding we just have a scary light heavyweight who is making his UFC debut after an 18-month layoff. Last time we saw Yoel, he was in that weird fight with Rafael Cavalcante in Strikeforce, but now he’s set to take on Clifford Starks at UFC 158.

In honor of the Olympic freestyle wrestling silver medal winner’s return to MMA, let’s take a Blast to the Past and watch some of his impressive highlights. An excellent way to spend a Tuesday evening if there ever was one.

Dan Henderson says he will definitely put Lyoto Machida on his back, with his fists or a takedown
← Read Last Post 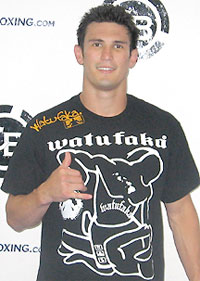 We're predicting KJ Noons vs. Cowboy Cerrone at UFC 160 will not go to the judges
Read Next Post →
Click here to cancel reply.