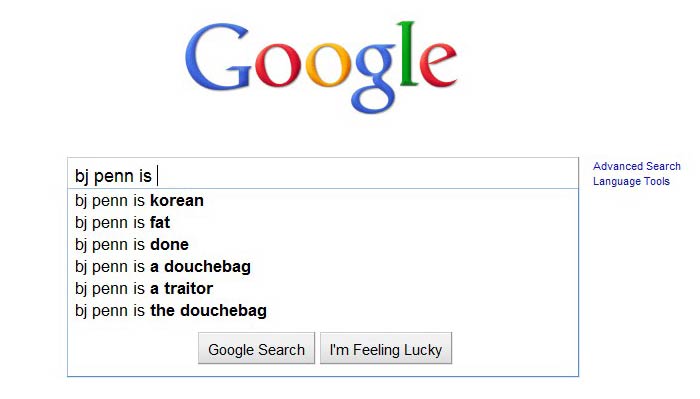 If you go on YouTube you can find lots of videos of males lighting fires under their own butts and the butts of their friends and cohorts. I don’t think I will ever understand the (seemingly) male obsession with one another’s butts and fire. It’s just not something us girls do. Most of us aren’t comfortable with putting burning things anywhere in the vicinity of our nether regions. The closest we come to that is at the Brazilian wax shop when the aesthetician sets the temperature just a little too high on the crock pot full of molten wax. Ouch. Just the thought of that experience is enough to make me want to go check the tag on my panties for the words ‘flame retardant material’.

Unlike me, BJ Penn doesn’t fear a little fire under his butt-he relishes the heat. According to the recent UFC on FOX 5 conference call, Rory MacDonald’s tweets regarding Penn and his ‘physique’ ignited a blazing fire under his butt that had been merely smoldering prior to the initial fight date getting postponed due to an accidental camp eye injury for MacDonald.

“That really lit a fire under my butt.”

“We took my belly off. I think the best thing for me was getting the fight postponed. I realized I can’t do this forever, so I might as well make the most of it.”

“This has always been a fight for me, and I just love it when it’s that way. I love it when my opponent says that: ‘He’s fat, I’ll end up killing him, he’s nothing, this and that.’ It’s all wonderful. I couldn’t ask for anything more.”

In just a little over a week, we’ll get a glimpse at the physical results produced by lighting a fire under BJ Penn’s butt when he meets Rory MacDonald at UFC on FOX 5 live from Seattle Key Arena. [Source]

We never thought we would see it, but check out the poster for DREAM 18
Read Next Post →
Click here to cancel reply.