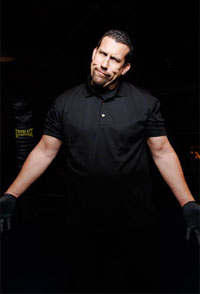 If you pre-order EA Sports MMA at Best Buy, you’ll get a code to unlock Big John McCarthy as a playable character. Big John is also an official referee in the game which brings up the inevitable paradox of playing as Big John McCarthy with Big John McCarthy officiating the fight. Planets may melt and the atmosphere will probably turn into one giant, congealed piece of candy corn in this paradoxical scenario. Hopefully the developers at EA Sports have mapped this one out, otherwise we’re all screwed. However, not as screwed as Jeremy Horn in his UFC 17 championship bout with Frank Shamrock. In this interview with Ben Fowlkes of MMAFighting, Big John openly admits that he made a blunder by standing up Jeremy Horn when he had a dominat position on Frank Shamrock, something that may have cost Horn a UFC Light Heavyweight title.

Horn would go on to lose the UFC light heavyweight title fight via kneebar submission, and afterwards McCarthy headed back to the locker room to talk to him. Hadn’t Horn heard his warnings to stay busy, McCarthy asked? Horn replied that he heard them loud and clear.

“So I said, ‘Then what were you thinking?'” McCarthy recalls now. “And he said, ‘I was thinking, I’m mounted on Frank Shamrock and I don’t want him to do anything to me.'”

Frank Shamrock eventually caught Jeremy Horn in the sixteenth minute, back when all UFC matches were under the ‘Wallid Ismail’ rule. Well, not quite. This would require all matches to start off with an obligatory ten-minute rant and force every bout to occur on PePe Beach. [Source]