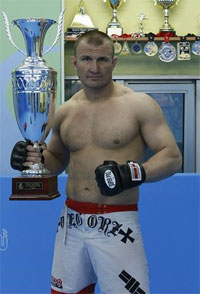 For some reason, Bellator has removed the traditional bracket system from their tournaments and have replaced it with a set of circles that exist within each other like Russian matryoshka dolls. They call it the ‘inner and outer circle system’ which has to go down as the first tournament system that resembles a ven diagram.

Season three of Bellator starts August 12th which denotes the beginning of the organization’s first heavyweight tournament. It sounds amazing because it has every ingredient to be astronomically amazing including a fleet of 265lbers that have more KO power than an entire bottle of Jack Daniels ingested by your ex-girlfriend on a Tuesday night. Yesterday, South Africa’s ‘Goliath Grove’ was added to the heavyweight tourney roster, a dude that is six inches under seven feet tall, walks around at 280lb and holds a 8-2-1 record with a 100% KO ratio. Bellator also snatched Damian “Polish Pitbull” Grabowski who has a ridiculous record of 12-0 with only three of those fights going longer than the first round. By cliche t-shirt default, I guess we all owe Grabowski a kiss since he’s Polish (although I’ll leave that up to you). Mike ‘300’ Hayes will also be participating in the upcoming tournament, a guy that has never been finished in his 12-3-1 career as well as Scott Barret, another guy that resembles every high-school bully you’ve ever encountered in your life.

Judging by the amount of animated gifs that are immediately created after each Bellator event, don’t be surprised if someone’s head flies completely off their body and is subsequently soccer-kicked by a fan in the fourth row on August 12th. XFC’s Chris Barnett has also been rumored to participate in the tournament, a guy that has made it acceptable for heavyweights to rock flying spinning round-house kicks repeatedly in a fight.