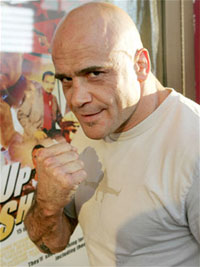 If you could only see what the site is going to look like tomorrow…today, then you’ll spit out the Coors light you’re drinking right now (Hello Brock). The entire weekend has been filled with redesigning MiddleEasy to make it truly live up to it’s true rawesomite potential. In the meantime I wanted to break a story that Bas Rutten somewhat broke last night on Inside MMA. During their 100th show (dude didn’t even shave for it), Bas Rutten announced that he’s signed a contract with EA Sports MMA to appear in the game. We’re hoping that it’s the King of Pancrase red underwear/knee high boots that we’ve seen deliver a liver punch like he worked for FedEX.

We’re working on a huge EA Sports MMA feature but for now we’re guessing that the game lets us drive a 1984 Delorean with an equipped flux capacitor so we can travel back in time, abduct our favorite MMA legends, stuff them in a videogame and control them. Or the alternative, they’re just stuffing everyone in the game so we can see dream matches like…Royce Gracie and Shinya Aoki. Life just got a little brighter after you read that match-up.