Australia and their horribly incorrect typos. It’s like some sort of self-fulfilling prophecy that can only be expressed through titles on PPV TV guides. Granted, these guys were most likely the decedent of prisoners that were whisked away to the island of Australia in order to remove them from society, so we should give them a break. Wait, is that politically incorrect? Too soon, egh? Alright you Aussie prisoners, I’ll let this one slide, but next time you better improve your English syntax. If not, the world is going to send you to West Virgina, a punishment unparalleled for even the hardened criminal.

Apparently the Australian cable provider, Foxtel, is trying to sell their customers an incredible fight of Nick Diaz vs. someone named ‘St.Penn’ for UFC 137. We’re not sure who this St. Penn character is, but listening to him speak is the most frustrating thing ever. Props to Josh. W for the find. 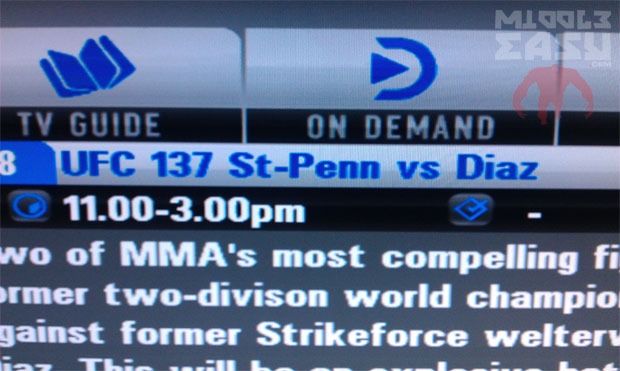 Motocross combined with MMA, this isn't insanity, this is Montana
← Read Last Post

Watch Nick Diaz get mobbed by fans in the Mandalay Bay after the UFC 137 weigh-ins
Read Next Post →
Click here to cancel reply.