As of today, Fedor Emelianenko is a Russian politician and he plans to enforce the people’s rights 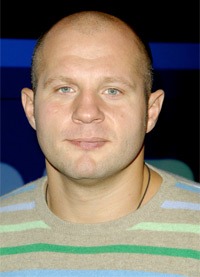 I wouldn’t be surprised if years from now, middle-aged men will claim that they saw a picture of Fedor inside a tortilla or depicted on the back of a piece of toast. When it comes to demigods in combat sports, The Last Emperor resides on the same realm as Chuck Norris in some alternate universe where roundhouse kicks and overhand rights are currency. Back in June we broke the news that Fedor Emelianenko was running for senate and that he may retire at the end of his Strikeforce contract. A few people believed us, others were too busy reheating their left over Hot Pocket to read the story, and then there was a handful of you out there that simply didn’t believe the story. To the people that were reheating their Hot Pocket, you really should start eating healthy. Hot Pockets are cooked by a radioactive process, and that just can’t be good for you.

To all of you that refused to believe that Fedor was an aspiring politician, the joke’s on you. My finger is pointed in your general direction. Today, ValeTudo.ru found a picture of Fedor Emelianenko’s government certificate that apparently makes him the regional senate of his state of Belgorod, Russia. Fedor Emelianenko is now a member of Russian parliament. 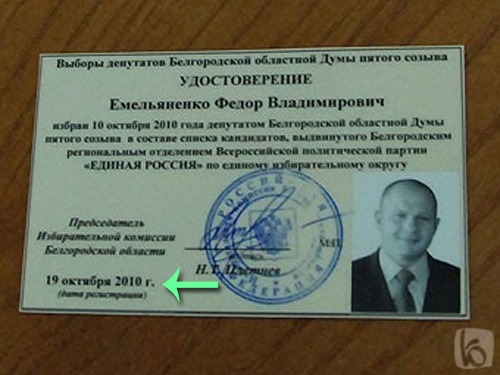 By some bizarre occurrence, I decided to check my Twitter just before I interviewed Fedor Emelianenko at the EA Sports MMA press conference earlier today. MMASupremacy, tweeted (twatted?) Fedor’s political news just minutes before it was my turn to interview The Last Emperor. Great, I finally had something to ask Fedor besides the generic trifecta of ‘Who are you fighting next?/What’s going on with your contract?/What happened in your fight with Werdum?’. When I approached him, he had a look of ‘Hey, look at that guy with that snazy outfit, I want to talk to him’, however after I showed him the leaked pictures of his government document, that look changed to ‘How the hell did this guy get this photo?’. I asked Fedor what exactly he intends to do with his new political career, and here’s The Last Emperor’s short and concise response.

“Why not? I’m going to try it out. I want to enforce the people’s rights and make living [in Belgorod, Russia] better for the people.”

That’s the best you can get out Fedor at any given moment. Ben Fowlkes of MMAFighting inquired about Fedor’s political career, to which he blatantly denied. The guy is an enigma, maybe it’s better that we shouldn’t fully understand his behavior. Also, for those of you who don’t believe Fedor is a video game aficionado, you are rudely mistaken. The guy defeated Randy Couture effortlessly in a EA Sports MMA bout. After he grabbed the digital victory, Vadim Finkelstein took video on his iPhone of Fedor defeating Randy Couture in a digital universe that can now exist on your Xbox 360 or Playstation 3 starting today.