Anderson Silva says Vitor Belfort should NOT trade strikes with him

The ‘Oh no he didn’t’ train just rolled in town and Anderson Silva decided to pack his bags and hop on. The ‘Oh no he didn’t’ train is rumored to be heading back to 1994 where it belongs (along with phrases like ‘That’s whack’, ‘Cowabunga’ and ‘Smell you later’). In an interview with Sensei Sportv, Anderson Silva said a lot of stuff in Portuguese. Normally, that news wouldn’t really mean anything to you unless you’re from the country that’s going to host the 2016 Olympics. However, when sent through the international MMA translation machine (operated by MMA.tv) Anderson Silva actually calls out Vitor and tells him what he shouldn’t do in his upcoming fight with ex-Affliction, newly-re-UFCed veteran Vitor Belfort:

“I am sure Vitor won’t trade against me striking. No one would. Were I to fight against a Jiu-Jitsu guy, I would not fight on the ground.”

I hope I’m never placed in a scenario in which I have to exchange with Anderson. I could think of 400 other things I would rather do than take a punch from Silva and they all involve running away. [Source] 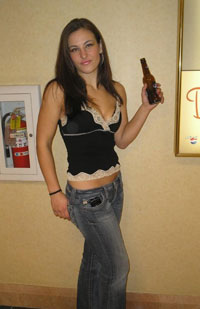 Fedor got married today, proving he may be human
Read Next Post →
Click here to cancel reply.