UFC on ESPN+ 7 is going down live now (Saturday, April 20, 2019) from inside Yubileyny Sports Palace in Saint Petersburg, Russia.

Welcome to the main event of the evening! It brings the promising 265-pound clash between two experienced fighters. The former DREAM and Strikeforce titleholder Alistair “The Demolition Man” Overeem squares off against KSW 8 Heavyweight tournament winner and submission expert Aleksei “The Boa Constrictor” Oleinik.

The third man inside the octagon is Marc Goddard. This is the match between the two experienced fighters. The battle starts!

Oleinik delivers three big punches, Alistair is on the fence, Oleinik attacks with punch combo, but Alistair survives and Oleinik clinches up. Alistair delivers big knee, but Aleksei presses him against the fence and clinches up. Oleinik ate another knee to the midsection, and one more knee to the head.

Wait, this was a hammer-fist by Oleinik in the stand-up exchange, this was funny. Overeem is in the clinch, another knee. Left jab Oleinik. Oleinik goes forward and spams punches. Both fighters are in the clinch again, Overeem is pressed against the fence.

Overeem rotates and delivers big knees, but Oleinik pushes him against the fence again. Oleinik goes for a body punch but hits the opponent’s left hand, good block by Overeem.

It seems Oleinik landed more punches! Wow, brutal knee to the mid-section by Overeem. And another one! Left hand blocked by Overeem. Oleinik pressed his opponent against the fence, punches him off the clinch.

Wow, Overeem made a superb transition, and now he pushes Oleinik towards the center of the cage.

Oleinik goes down. Alistair Overeem demolishes Aleksei Oleinik, these are big strikes. That’s it, Mark Goddard stops the fight, it’s all over!!!

Victory for Alistair Overeem, what a round!!! Ladies and gentlemen, “The Demolition Man”! 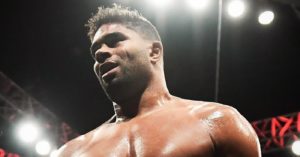 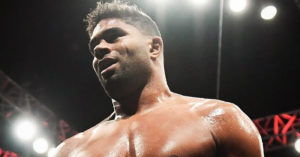