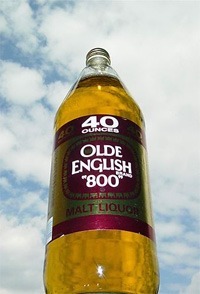 The coolest thing that was said before the live feed of the Strikeforce: Carano vs. Cyborg press conference dropped out was that Gina Carano was inspired to train in MMA by drinking a 40oz of Olde English. Story goes that her and her ex-boyfriend were sitting in his parents house throwing back 40 ounces of Olde English and her boyfriend was talking to his dad about MMA and telling him he could do it. His dad said it would be impossible for him to do anything with a 40oz in his hand (which is not true, I’ve stolen golf carts and nearly saved the world with a 40oz in my hand). So he put it down, started training and stopped drinking for an entire year. Apparently he’s an instructor somewhere and will regret the day he broke up with her for the rest of his life.

After seeing her boyfriend train, Gina was somewhat inspired to do the same thing. At the press conference she said she really got into the sport after a Thai Master called her ‘fat’ (that’s such a chick move). If I ever called my ex-girlfriend fat, it would have probably resulted in a stainless steel wok slammed against my head (it’s happened before). Apparently when you’re a Thai master, you can call a chick anything and get away with it. Or maybe ‘fat’ in Thai means ‘You’re a hot chick and need to train in MMA’. Maybe the next chick I date I should front like I’m a thai master and call her fat. I’ll sit back, wait a couple of years and then rock on her dime when she’s the best female MMA fighter out there. That’s not called gold digging…that’s ‘imitate a thai master’ digging. It’ll work.

Carano also said she gets her ass beats by guys on a daily basis (in the cage) but she gets a couple of licks in here and there. After the entire room stopped laughing like middle schoolers after the first time they discovered what the number ’69’ meant, Carano just shook her head and laughed. Also, the brilliant question of ‘How is female MMA different than male MMA was posed for the 7,300th time this year and Carano answered with ‘We’re different creatures…no penis’. Solid.