All UFC fighters know that they carry a risk of suffering a major injury while training or competing due to the nature of the sport. One of the most common injuries that is visible on many fighters is when they have a weird looking ear, which is known as cauliflower ears.

Fighters spend a lot of time sparring or competing, which leads to the ears being exposed to repeated blows over a period of time. This leads to the fighters ears cramping up and therefore resulting in the weird looking ears.

Cauliflower ears don’t just happen overnight, they occur with an accumulation of repeated hits in an athlete’s ear over a period of time. Wrestling is the most common way of getting cauliflower ears since the athlete bumps to the wrestling mat a lot as well as the risk of bumping into your opponents head, however you can still get it by training any other form of martial arts.

Repeated blows to the ear lead to small blood clots being formed that block the blood flow and stop the needed nutrients that the body produces. This then leads to a scar tissue being formed which results in an abnormal look for the athlete’s ear.

It should be said that there are many ways that someone can develop a cauliflower ear, but for MMA fighters this is the most frequent way in which it occurs.

One of the main ways in which someone can prevent developing a cauliflower ear is through wearing headgear that covers the ear when training. The headgear used should fit perfectly as if it is too loose the ear can slip out and be prone to damage, while a headgear that is too tight can pressure the ear and result in the blood clots that lead to cauliflower ear. However, for fighters you can never guarantee the prevention as you can’t compete with headgear on.

If an athlete’s ear starts to develop blood clots in their ear they can still treat it before it develops into a cauliflower ear. A simple way for treatment is to put an ice pack on the ear for around 15 minutes after a training session or a fight. Also, if done quickly enough a doctor can remove the fluid from the ear that contains the blood clots, this will prevent further blockages and heal the ear.

This might come as a surprise given how unpleasant the ear looks, but many MMA fighters actually want to have a cauliflower ear because fighters consider it a badge of honor. In some cases fighters will look to damage their ear purposely to get a cauliflower ear.

Although not all fighters look to actively damage their ears, it is common that once a fighter has a cauliflower ear they won’t look for ways to treat it and instead live with it. Fighters prefer this as it makes them stand out in public and makes people know that they are fighters which could make people less likely to confront them.

Some of the UFC’s most famous fighters, such as Khabib Nurmagomedov and Alexander Gustafsson, have cauliflower ears and embrace it.

UFC welterweight contender Ramiz Brahimaj was making his UFC debut in November 2020 against Max Griffin. Before the bout you can see Brahimaj had cauliflower ears, but nothing out of the ordinary for MMA fighters.

The referee stopped the action 2 minutes into the thrid round, due to an elbow landing from Griffin that caused Brahimaj left ear to be essentially detached. This was one of the most disturbing injuries in UFC history and highlights the importance of taking all the necessary precautions to avoid having a cauliflower ear.

It shouldn’t come as a surprise that Couture has one of the worst cases of cauliflower ears in the UFC due to his wrestling background. Even though Couture is one of the most accomplished UFC fighters of all time, he told ESPN in 2013 that “nobody really cares about the other stuff. It’s my ears that are famous.”

A former UFC Champion with over 30 appearances inside the octagon, Dos Anjos is known for his high paced fighting style. The Brazilian is a fan favorite due to his willingness to fight anyone anytime. Over the years, giving his experience and fight style, Dos Anjos has developed one of the worst states of cauliflower ears.

The 37 year old’s ear now doesn’t look like a human ear anymore due to the accumulated damage he received over time. He also experienced one of the worst ear injuries in the UFC during his interim Welterweight title fight at UFC 225 against Colby Covington where his ear was almost completely ripped off his head.

Ryan Hall could be the least intimidating looking fighter in the UFC, he is known for being a nice guy in the sport. The 37 year old is one of the most skilled BJJ fighters in the history of the UFC and has submitted the likes of B.J. Penn in less than 3 minutes.

The only way you could tell that Hall is a professional fighter is through his cauliflower ears. However, since most of his fights take place on the ground and that he has been competing in BJJ for more than a decade, it is normal that he developed cauliflower ears over time.

Arguably the most dominant fighter in MMA history, Nurmagomedov retired in 2020 undefeated and holding the UFC Lightweight belt. He was famous for his ‘smesh’ fighting style, where he would take his opponents down and beat them up.

The former Lightweight champion grew up on the wrestling mats in Dagestan, which is where he developed his cauliflower ears. During a recent appearance on the Full Send Podcast, Nurmagomedov joked about his ears saying that “with headphones I have problem… they don’t stay inside.”

Gustafsson’s nickname is “The Mauler” which tells you all you need to know about his fights. He has one of the worst cases of cauliflower ears as The Swede is accustomed to get into wars, with 4 of his UFC fights earning the Fight of the Night bonus.

Former 2 division PRIDE champion, Dan Henderson has one of the hardest punches in MMA history. He grew up as an olympic wrestler but due to his heavy right hand he strayed away from his wrestling in the latter part of his career.

Most fighters now have cauliflower ears, due to the brutal nature of the sport, and if you are looking to start a career in combat sports it could seem that having cauliflower ears is an achievement and will make you tough. However, it is recommended that you take all precautions necessary to avoid developing a cauliflower ears as there could be nasty consequences.

Can a cauliflower ear explode?

Yes, it is normal for a cauliflower ear to explode if the ear gets hit enough times. In 2014 at a UFC event we saw this for the first time when Leslie Smith’s ear exploded after taking a right hand from Jessica Eye to the ear.

When someone first gets a cauliflower ear it causes pain, however as time passes by the swelling hardens and it becomes less painful.

Who are some fighters with cauliflower ears?

It is normal for fighters competing to have cauliflower ears. Some fighters who have it include Frankie Edgar, Colby Covington, Rafael Dos Anjos and many more. 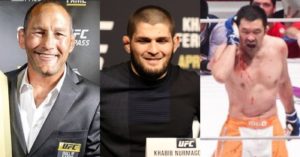 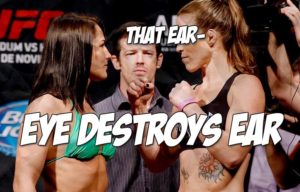 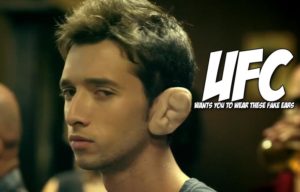