Cris Cyborg is a type of a fighter everybody likes to watch. She remains dominant throughout the fight. With an outstanding endurance and a world-class cardio, she can easily fight for five rounds. Cyborg is known for the endless power of will. She is also known as Cristiane “Cyborg” Justino.

She is a black belt in Muay Thai and a brown belt in BJJ. Cris Cyborg had three kickboxing matches during her career, and she won two of them. She also competed in submission grappling, which explains her excellent ground game. However, she mostly tries to keep the fight standing.

On the ground, she punches on and on until the referee stops the fight. In the stand-up, her most devastating weapon is a Muay Thai knee off the clinch. She also connects with hooks, and her combos rarely last less than five seconds. Cris Cyborg constantly pressures the opponent during the fight.

Cris Cyborg made her debut on May 17, 2005, in Show Fight 2 event, which was held in Curitiba, Brazil. She was defeated in this fight by Erica Paes via kneebar in the first round. This is the first and only loss of her career! 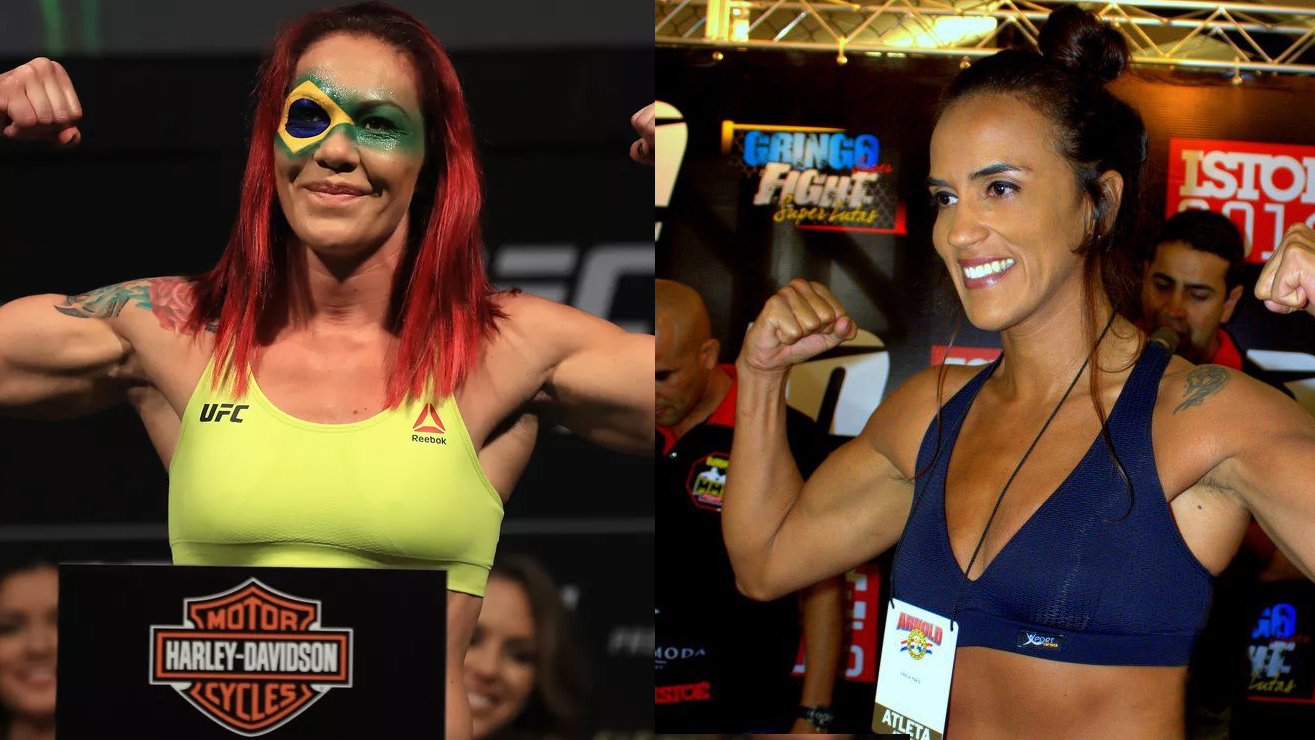 Her next four fights were held in Curitiba, Brazil. She fought in the Storm Samurai promotion during 2005 and 2006. She won Vanessa Porto via unanimous decision, Chris Schroeder via TKO, Elaine Santiago via corner stoppage. Her victory over Marise Vitoria via stomps is one of the most brutal in the history of female MMA fighting.

Her first Elite XC fight took place on July 26, 2008, in Stockton, California. She defeated Shayna Baszler via TKO. She competed in Catchweight (140 lbs).

In the second Elite XC fight was against Yoko Takahashi on October 4, 2008, in Sunrise, Florida. She won via unanimous decision. Cristiane “Cyborg” Justino also fought as a Catchweight competitor (150 lbs) in this tournament.

Cristiane “Cyborg” Justino made her Strikeforce debut in the fight against Hiromi Akano on April 11, 2009, in San Jose, California. The event name was Strikeforce: Shamrock vs Diaz. She should have competed in Catchweight (150 lbs), but she was 6 lbs heavier. Luckily, her opponent accepted the fight, and Cris Cyborg won in the third round via TKO.

Cris Cyborg got a chance to fight for the title in the main event of the evening – Strikeforce: Cyborg vs Carano. The event was held on August 15, 2009, in San Jose, California. Gina Carano was undefeated at that time, but Cyborg dominated the fight via superior boxing skills and won in 4:59 of the first round via TKO. 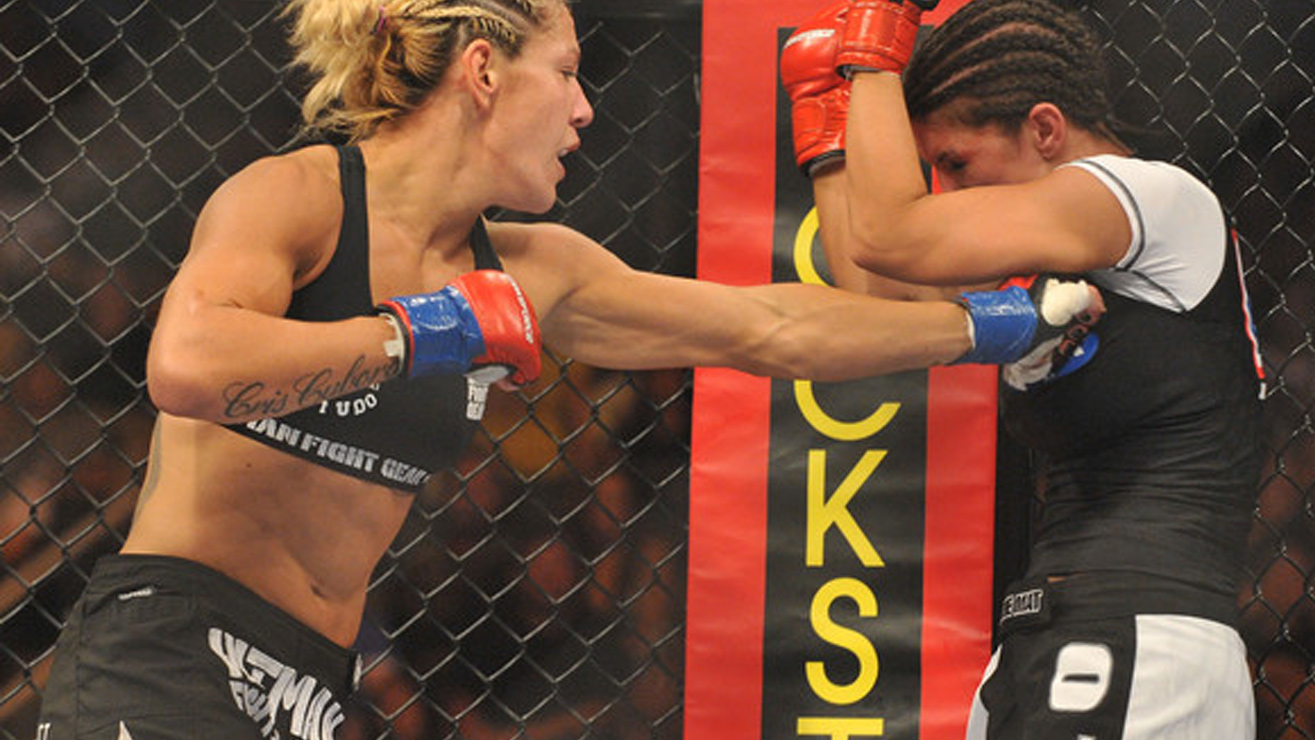 The next Strikeforce title defense was on January 30, 2010, in Sunrise, Florida. Marloes Coenen was a decent rival, but Cris won at 3:40 of the third round via TKO.

On Strikeforce: Fedor vs Werdum in the co-main event of the evening, which took place on June 26, 2010, in San Jose, California, she knocked Jan Finney via the spectacular knee to the body out. This was the first time ever she was using Muay Thai clinch to finish the fight.

Cris Cyborg faced Hiroko Yamanaka and won with ease after only 16 seconds in the first round via TKO. The fight took place on December 17, 2011, in San Diego, California. 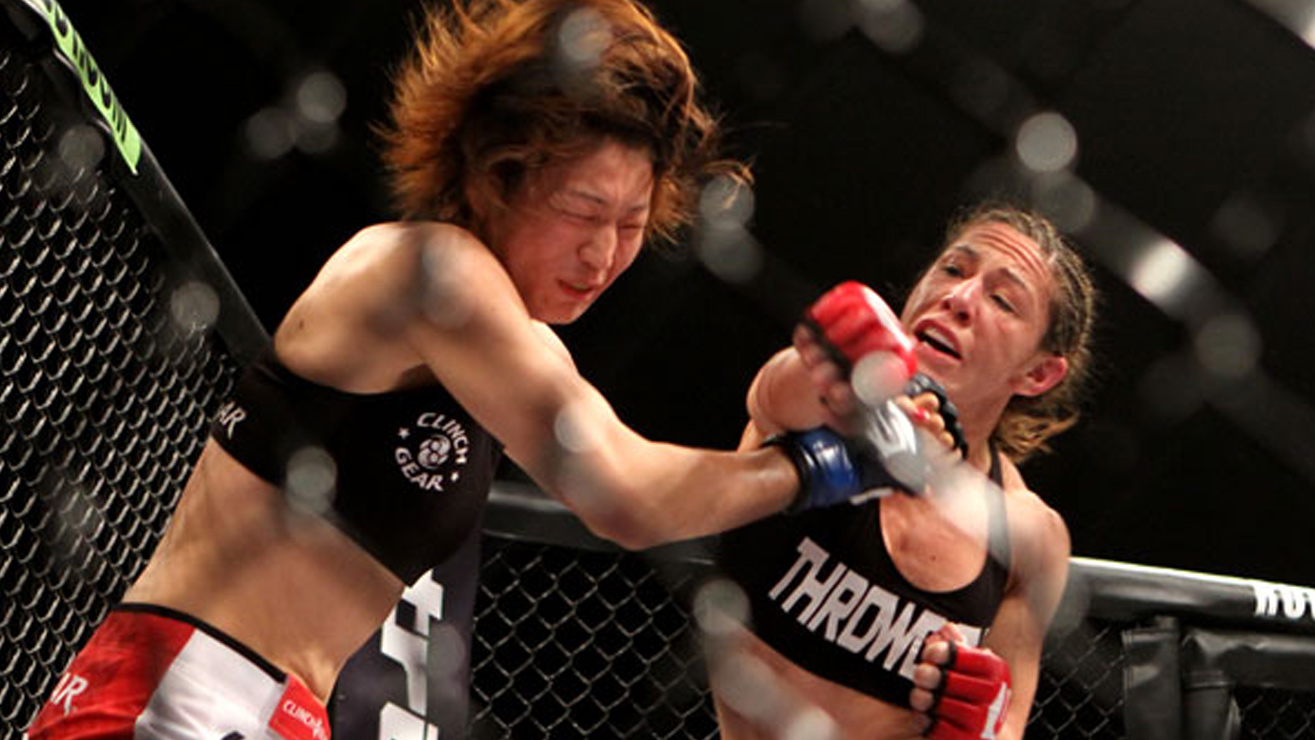 She was positive on stanozolol, one of the anabolic steroids. The news is published on January 6, 2012, and the result is changed to no contest. Cyborg was suspended for one year and she had to pay $2,500 penalty.

Cris Cyborg made her Invicta FC Featherweight debut on April 5, 2013, in Kansas City, Missouri. She crushed Fiona Mixlow in the first round, winning via amazing TKO.

Cris Cyborg justified her nickname in Invicta FC competitions – every single fight was finished via TKO, before the final bell. There was no female fighter in the history of Invicta to be so dominant.

Cyborg faced Marloes Coenen in the main event of the evening. The fight was held on July 13, 2013, in Kansas City. This was her most difficult Invicta FC fight, and she won the Invicta FC Featherweight title via TKO in the fourth round. 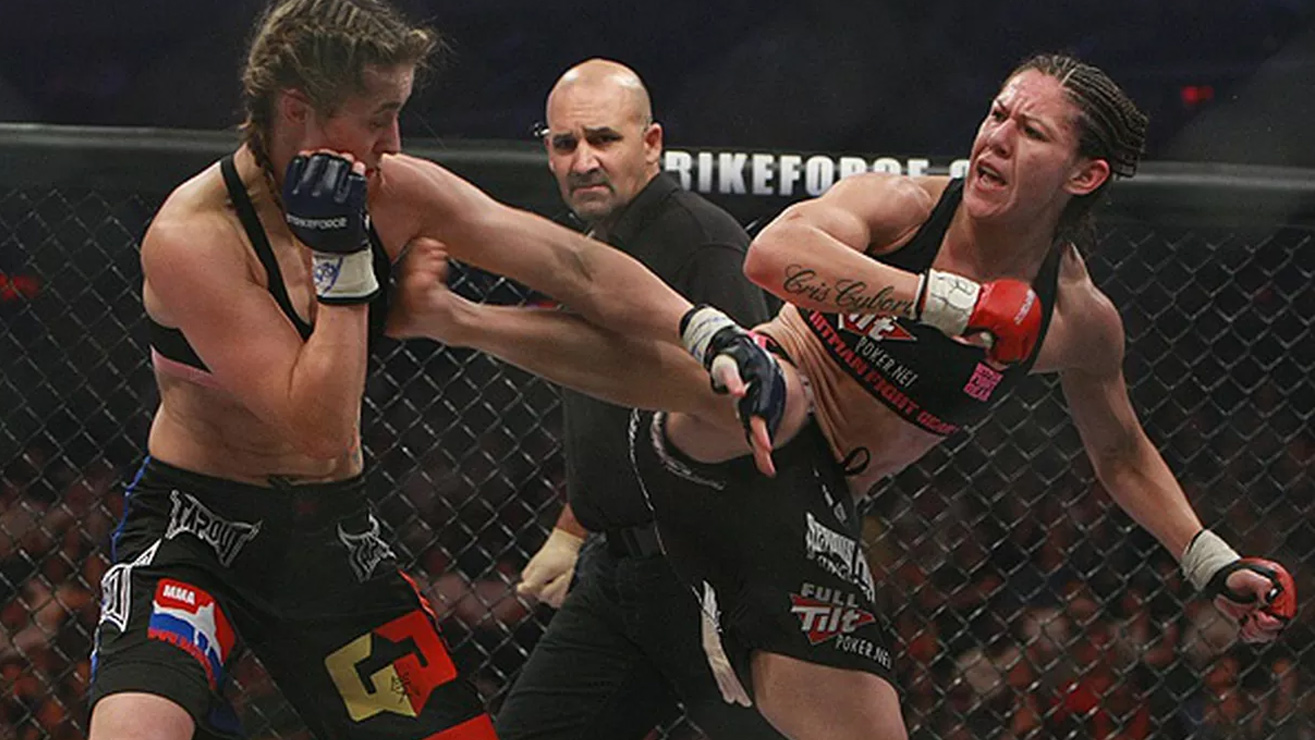 Throughout the fight, Cris demonstrated stunning takedown defense skills. All her next Invicta FC Title Defense matches were the main events of the evening!

She was dominant again versus Faith Van Duin, on July 9, 2015, in Las Vegas, Nevada. After only 0:45 in the first round, the referee had to stop the fight after a brutal knee to the body.

Cyborg faced Daria Ibragimova, a master of Sambo, on January 16, 2016, in Costa Mesa, California. She won in at the end of the first round via TKO, demonstrating excellent submission defense skills.

Cris Cyborg made UFC debut versus Leslie Smith in UFC 198, on May 14, 2016, in Curitiba, Brazil, in Catchweight (140 lbs) bout. Motivated by the support of hometown fans, Cris ended the fight after only 1:21 in the first round via TKO. 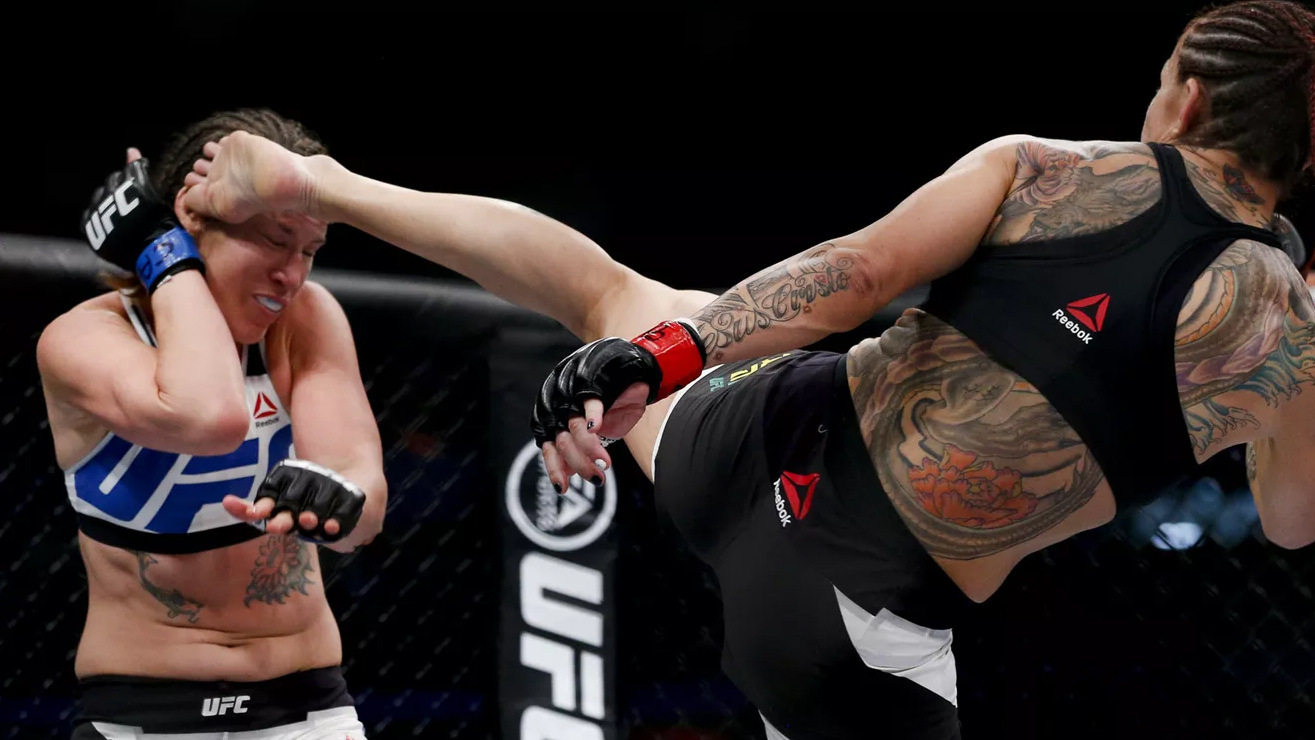 The next event was UFC Fight Night 95, and it was held on September 24, 2016, in Brasilia, Brazil, also in Catchweight. Cris is one of the rare women in UFC who got the chance to fight in the main event of the evening. She won again via TKO.

At UFC 214, she fought Tonya Evinger in Anaheim, California, on July 29, 2017. Cyborg successfully earned the UFC Featherweight belt by the world-class knees in the third round.

Cris Cyborg faced Holly Holm in UFC 219, on December 30, 2017, in Las Vegas, Nevada. Cyborg vs Holm was the main event of the evening. Cristiane “Cyborg” Justino won via unanimous decision, and this was the longest fight of her career. 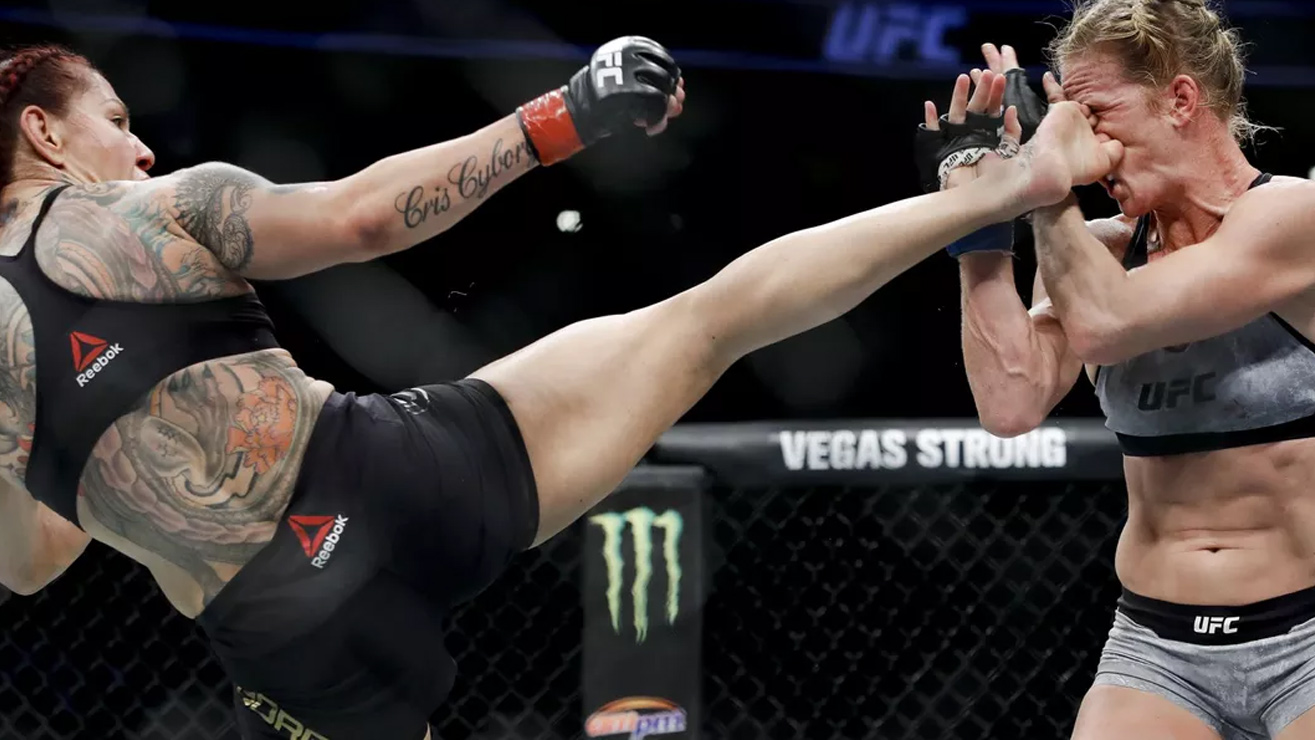 Cris Cyborg fought very patiently and her attacks were mostly hitting Holm’s head and body. Despite Holm was better in the clinch control, she was unable to take Cris down. Cyborg’s right cross and right hook were an unsolvable enigma for her opponent through the whole match.

Both fighters demonstrated world-class stand-up skills. The fight was very dynamic and interesting to watch, even during the championship rounds. Cris Cyborg had shown higher levels of endurance and landed more clean shots in the last two rounds.

After a successful decision victory over Holly Holm at UFC 219, Cris Cyborg verbally agreed to fight Megan Anderson in UFC 221 in Perth, Australia, on 10th February 2018.

Anderson said that UFC 221 fight card is already booked, but the fight will happen at some point. Cris Cyborg and Megan Anderson should have already faced in UFC 214, but Megan withdrew due to “personal reasons”.

Cris Cyborg was married to Brazilian MMA fighter, Evangelista Santos. She even adopted his nickname, “Cyborg”. The couple divorced in December 2011. She became U.S citizen in 2016. She’s now engaged to her longtime boyfriend, Ray Elbe in 2017 who’s also happen to be her trainer and ex-MMA athlete.