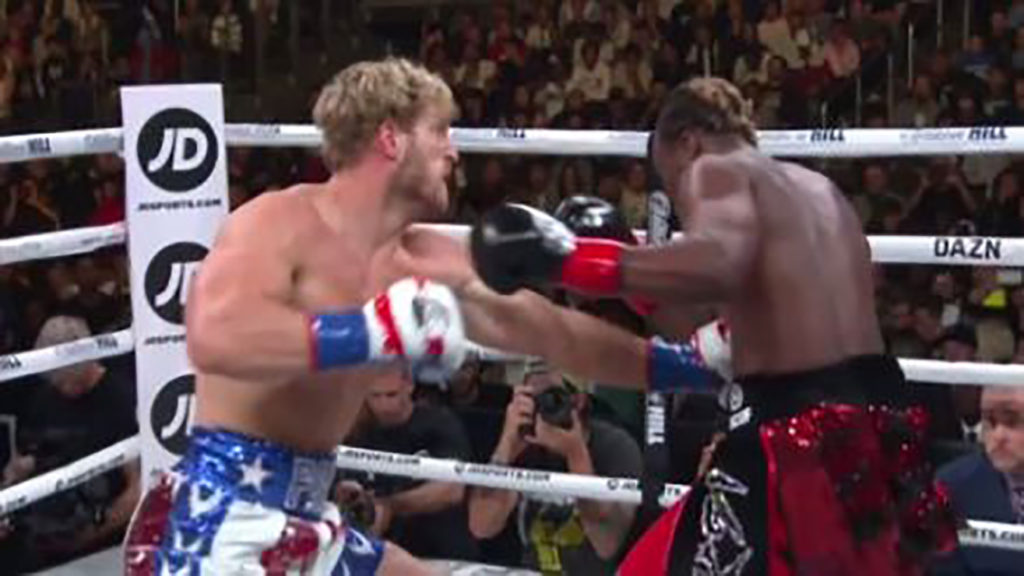 The two boxed in 2018 in England as amateurs with headgear on and fought to a majority draw. The bout produced over 1,000,000 buys through YouTube and became the biggest amateur fight in the history of boxing.

This is the first pro boxing match for both fighters. Logan Paul walks out first. He is a controversial 24-year-old entertainer from Westlake, Ohio. The 26-year-old KSI, born Olajide Olayinka Williams “JJ” Olatunji in London, comes next. KSI is in red gloves and black trunks, Logan Paul sports blue gloves.

Michael Buffer is handling the ring announcing inside Staples Center. The referee in charge of this six-round cruiserweight bout is Jack Reiss. Here we go!

Fighters touch gloves. Jabs to the body KSI, Paul fires back with a counter jab. Right hand KSI. Reiss warns both fighters for hitting on the break.

Hard jabs Logan. KSI misses over and over. He is trying to turn the lights out on Logan in every shot but wastes too much energy. Good punches from Paul. 10-9 Paul.

More jabs from Paul, he’s controlling the distance. KSI’s hooks look very sloppy at the moment. He looks back at his corner for instructions but eats a powerful jab.

KSI misses with a right cross, Paul clinches up. Paul is staying composed, great defense. KSI connects with a punch and Logan Paul falls to his knee but the ref says it was a slip!

More short punches KSI. Fighters trading jabs. Two-punch combo lands for KSI and he exits the clinch. Paul ducked a punch and slipped on the canvas ducking a punch but no knockdown this time. KSI won this round 10-9.

Wait, but the replay shows KSI scored a knockdown in the third frame, it was powerful right hand!

Reiss says Logan Paul scored a knockdown but he takes away two points from Paul for holding and punching KSI while he was down!!! This round could be scored 8-8.

Jabs to the body Paul. KSI looks recovered from the powerful uppercut. More jabs from Logan, he controls the distance.

KSI comes up short on a combination, Paul counters well. Paul goes forward and delivers a big uppercut then clinches up. 10-9 Paul.

Chest shots KSI. Paul retreats, KSI keeps attacking. He was more aggressive in this round. 10-9 KSI.

KSI after winning the match: