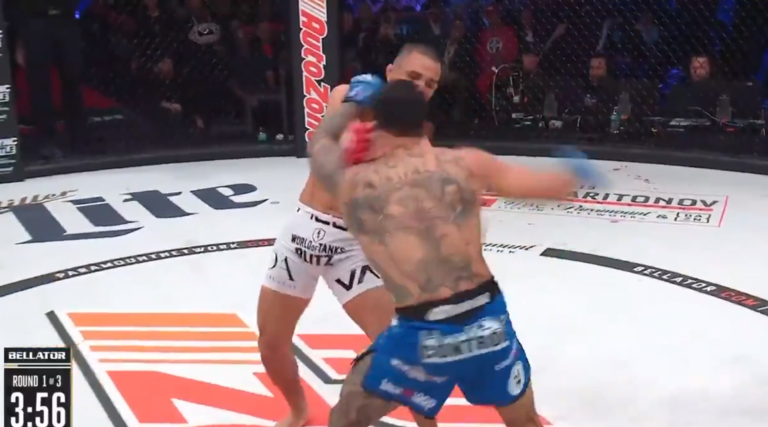 Bellator 214 is happening tonight (Saturday, January 26, 2019) from inside The Forum in Inglewood, California.

The co-main event of the evening brings the Featherweight match between decorated wrestler Aaron Pico and Henry “OK” Corrales. Both fighters are riding on a hot streak, with 4 wins in a row. The referee is Jason Herzog.

Pico is in red gloves, while “OK” wears the blue ones. Let’s start!

Corrales goes for a leg kick. Then another kick to the legs followed by a left hand. “OK” shows his superb striking skills at the beginning of the match.

But Aaron backs off at 55 seconds. Henry survived the onslaught.

Now two fighters are throwing brutal strikes at each other. Pico goes with uppercuts to the body.

You can see in the replay how perfect this combo was. Henry even delivered left-right combination as Pico toppled over, great skills! Fantastic performance by Henry Corrales!

WOW!!!! What a change of fortune. A huge uppercut by @AaronPicoUSA and a bigger KO from @HenryCorrales86 pic.twitter.com/tHi4dVYpSy

Holy smokes! Henry Corrales detonates Aaron Pico in one round! Here's the full fight with some replays mixed in. #Bellator214 pic.twitter.com/RpqSPFoKJG

Final Result: Henry Corrales defeats Aaron Pico via KO (1:07) in the first round.

Shots Fired: Ben Askren To Khabib I Will Fight You For The 165-Pound Title In October
← Read Last Post