The co-main event features former UFC fighter Mike Perry making his debut against “The Ultimate Fighter” competitor Julian Lane. This comes after months of trash talk and a ringside brawl between the two.

Mike Perry gets a quick knockdown of Julian Lane to start off his BKFC debut. Lane gets up pretty quick, not taking the count. Both guys decide to trade in the pocket, with Lane recovery’s in full effect. Perry bloodies the face of Lane, but Lane returns fire with effective shots to the body and head of Perry. Round ends after a short two minutes of action.

Perry sits down Lane momentarily, but Lane gets up immediately. No knockdown scored. Lane lands a good 1-2 on Perry. Perry returns with a right hook. Perry lands an uppercut as Lane looks to land from inside the pocket.

Perry pours on the pressure on Lane. He pushes the pace as he looks to batter the already bloody Lane. They clinch as they look to do some dirty boxing. They separate. Perry lands some shots from the distance. Lane gets on the inside, landing some uppercuts. Perry chases Lane to the ropes, landing big with a multitude of punches.

They talk to each other as they toe the line. A medical timeout is called to inspect the cut face of Lane. Perry catches Lane with a crisp right hand, which nearly knocks down Lane. Left hand lands for ‘Platinum’. Perry lands some great hooks on Lane as his opponent returns fire. Lane ducks into a right hand from Perry. Lane cracks a big overhand on Perry, finishing the round with some punches.

Lane looks to throw Perry off, with an onslaught of punches entering the last round. Lane keeps on him, landing effectively on Perry. Perry fires back, but not with too much avail. Lane continues to crack Perry, as ‘Platinum’ doesn’t have an answer for it. Fight ends in bloody fashion.

Julian Lane fires off at Mike Perry and Mike returns fire at the bell. #KnuckleMania2 pic.twitter.com/QbBIm4vNCg

The trash talk continues after the fight as you can clearly see both men were in a war. Mike Perry's hand looks like a balloon!#KnuckleMania2 pic.twitter.com/CMio0dIdj7 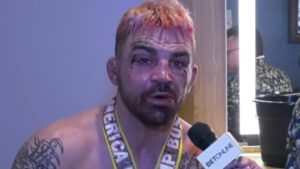 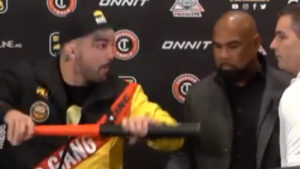 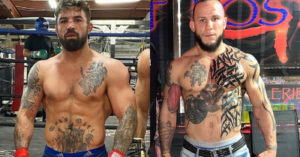 Mike Perry vs. Julian Lane Set For KnuckleMania On Feb. 19 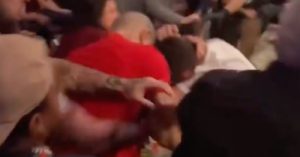