Yair Rodriguez Knocks Out Chan Sung Jung Via Spectacular Elbow In The Last Seconds Of The Match!

We’re inside Pepsi Center in Denver, Colorado, at the main event of the evening of UFC Fight Night 139. This is also UFC’s 25th-anniversary show! Welcome to the Featherweight showdown between Chan Sung Jung and Yair Rodriguez! This is the fight between two fighters who didn’t fight for a very long period of time. “The Korean Zombie” had the last match in February 2017, when he won Dennis Bermudez via KO. Meanwhile “El Pantera” was defeated in May 2017 to Frankie Edgar. We can bet both of these fighters will start aggressively!

Chan Sung Jung receives a leg kick at the beginning of the match. Good low kicks from both fighters. Excellent jab Rodriguez but followed up by a combo from the Korean. It looks like a pure low kick festival from both sides, what a match!

Punches and uppercuts from “Korean Zombie”. Rodriguez lands a liver shot. Good front kick and leg kick, these two are throwing everything they have! Sidekick to the leg but Rodriguez counters it with a leg kick and jab. Very strange counter but it passes! Jung tries a leg kick but misses.

Great counter hook from the Korean, and amazing leg kick followed by weaving overhand right. “El Pantera” goes to the body but attempts to land a front kick to the head.

Left hand from Chan Sung Jung And Rodriguez Is Rocked!

“Korean Zombie” chases Mexican with punches. Jung attempts an outside trip. Body kick Rodriguez. Yair tries to shoot in, fighters scramble, and the round is over. I’d say 10-9 for the Korean fighter.

Yair with a head kick but blocked. Rodriguez goes for a lead leg but receives a counter instead. What a great spinning back elbow counter from Yair, haven’t seen this great strike for a very long period of time! Jung attempts to trip his opponent and Yair ends up on the fence.

Rodriguez escaped via a back door. Good lead right from the Korean. He catches Rodriguez unprepared. Flying knee high kick Yair. Thai plum from Jung, who tries to create some space for knees. Rodriguez attempts trip and left hand, then an elbow. Jung punches back. The end of the round, very tough to score!

Head kick Rodriguez. Wheel kick is a bit short. Cartwheel kick attempt but no success this time. Body kick Yair, right hand “Korean Zombie”, body kick “El Panthera”. What a match, these two fight like there is no tomorrow!

Head kick and right hand Rodriguez, great punches, but Jung tries to take him down. Great left hook Yair. Hook jab Jung. Mexican threatens an Imanari roll. Switch kick from Rodriguez, we are looking some really spectacular attractive moves! The end of the round, I’d give this one to the Mexican.

Uppercut and right hand from Sung Jung. Rodriguez looks stunned, “Korean Zombie” with a left hook. Digging body kick from the Mexican. Right cross and counter right Jung. But the Korean is pushed and he is down. He got up quickly, fighters in the stand-up again!

Jab and left hook from “The Korean Zombie”, Rodriguez body kick, looks like the Korean has some problems, just take a look at his face. Head kick attempt from the Mexican. Rodriguez misses with a spinning elbow.

Rolling thunder Jair, “The Korean Zombie” keeps balance. Right hand from the Korean, the Mexican’s head is in big trouble. The end of the round, I’d give this one to Chan Sung Jung.

Jung with a great right. Jab exchange and a great cross from Sung Jung. Spinning elbow Rodriguez but another weaving overhand right counter from the Korean. Rodriguez attempts spinning back kick, fighters in the center again. Rodriguez shoots in but no success, great defense, and good left hook.

Jung controls exchanges, good jabs, and hooks. It looks like “The Korean Zombie” goes for all or nothing at the moment! Low kick and head kick attempt from Yair. Good spinning back fist, what an attractive move! Great left hook from the Korean too. What a match!

Victory for Yair Rodriguez literally in the last seconds of the match! It looks like a reverse upward elbow. What a move! 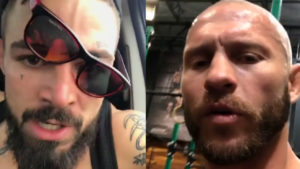 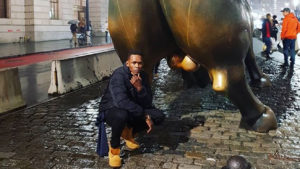 Israel Adesanya On Yair Rodriguez’s Stunning KO Win: ‘That Wasn’t Luck, But Was Some Matrix-Type Sh*t’ 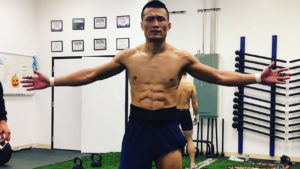 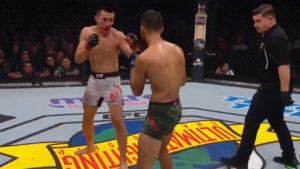 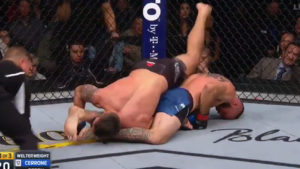 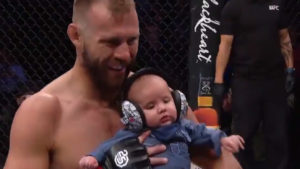