Why Fighters Should Stop Wearing Sunglasses Inside 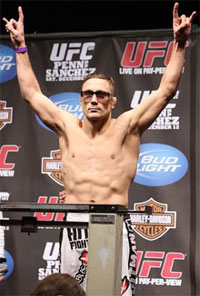 The only reason I started writing this morning is so that I could use ‘monkey business’ in a constructive article, but no valid subject-matter really made the cut so here goes a pretty convincing rant instead. After all, ‘Monkey business’ is the best way I can describe the practice and/or marketing of wearing sunglasses indoors.

Look, we’ve all seen Jersey Shore and if there’s one thing I’ve learned it’s no matter how cool your shades are, it’s not going to get you any ‘Snookie’ after a fight. Don’t believe me? Ask Tito Ortiz, Jamie Varner, Thiago Silva, Phil Baroni, Wes Sims, Mike Pierce, Greg Nagy, and Philipe Nover. All these dudes thought they were reppin’ the (732) hard when they threw on shades before their last fights, and all of them ended up losing pretty badly.

Varner went from being the WEC lightweight Champion to being asked to fight on an undercard. Wes Sims and Greg Nagy probably won’t be asked back to Strikeforce and Philipe Nover was cut by the UFC. Even Tito isn’t making out well. Dana just set him up to fight Chuck Liddell for a third time (a guy who has an entire highlight real of footage against Tito in 2 brutal knockout wins). Even Frank Trigg has been spotted with sunglasses indoors, and since then, he hasn’t won a fight, thereby being cut from the UFC too.

In fact, only Cyborg Santos got away rocking shades and scoring a win over Marloes Coenen in recent memory. This leads me to believe that the aforementioned does not apply to Cybernetic machines, only humanoids.

The moral of the story is that if habitually being late for work can get you fired over time, wearing sunglasses indoors is the equivalent of giving your boss the finger the day after he finds out his son is a Democrat. Please, don’t do it anymore.