Wait, is BJ Penn developing a Brazilian accent from training at Nova Uniao?

The only consistent exposure I have of Hawaiians is when @CynthiaVance and I occasionally hang out in the depths of Hollywood on the weekend. Usually she sounds like her typical Hawaiian self, but if we’re downing shots of vodka (which we usually do on a weekend), her accent manifests into this neo-Portuguese twang. It’s pretty wild to hear, actually. Granted by this time of the night we’re jumping in front of cars on the corner of Sunset and LaBrea and break dancing in the parking lot of the Rainbow Room.

So BJ Penn manifesting a Brazilian accent, sure I can see it. When I lived in Wales, it only took me a few months to start talking like a drunken Welsh chav. Everything was ‘lush’ and I would order drinks like ‘cider and black.’ The real question still remains, has BJ Penn developed a Brazilian accent from training with the guys at Nova Uniao? You decide in this PVT interview. 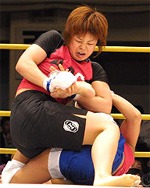 The Wolf Among Us: Smoke and Mirrors review
← Read Last Post
PC gaming has officially jumped the shark with Goat Simulator
Read Next Post →
Click here to cancel reply.