Vinny Magalhaes wants to leave M-1 Global not because of the company, but due to Executive Director Evgeni Kogan 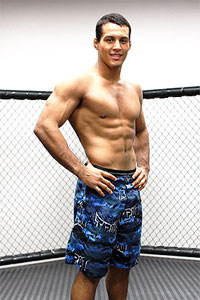 Vinny Magalhaes is a guy that can so obviously tool every man, woman and child on the ground that it’s borderline hilarious. Alright, well maybe not so much tool children on the ground — that’s more of a Penn State thing. Magalhaes’ Brazilian jiu-jitsu is the closest thing the world will ever get to a real-life Game Genie. That’s the greatest example I can possibly use to show his dominance in the jiu-jitsu world. It’s like legally cheating. Besides, Vinny Magalhaes can’t help it if he’s the new reigning +99kg ADCC champion. He can’t take back the six gold medals he snatched at the Rio de Janeiro State Jiu-Jitsu Championship Tournament, or the Brazilian National Jiu-Jitsu Championship gold medal he has sitting on his stack of other gold medals he obtained from being the American National Jiu-Jitsu Champion. Vinny can’t help that he’s dominant in jiu-jitsu. He suffers from an illness known as ‘tapticulous,’ symptoms include forcing other people to tap if they unfortunately venture into his vicinity. It’s highly contagious. Vaccinate your children this Winter.

We caught up with Vinny Magalhaes this week, and he told us that he does intend to leave M-1 Global, but it’s not due to the company. In fact, the company has treated him quite well. However, it’s the executive director, Evgeni Kogan, that he just can’t handle anymore.

Brian Ebersole answers the eternal question: What do you know about Claude Patrick?
Read Next Post →
Click here to cancel reply.