UFC Adds Drug Testing As Part Of Revenue Given To Fighters

Some very interesting things have developed as a result of the UFC anti-trust lawsuit. Notably, it has been revealed what goes into to the share of the revenue that the company pays its athletes.

For those who have been paying attention, the UFC anti-trust lawsuit has been providing some very interesting facts. It has given access to information that is not otherwise available, such as actual fighter pay, shady negotiation methods, and more. Due to the fact that under penalty of perjury, they have to reveal all information open and honestly, it gives a new look at the company’s inner mechanics.

One piece of interesting reporting which has been revealed is that the UFC allocates around 20% of it’s revenue to the fighters. Meaning that for every dollar that the company makes, 20 cents goes back to the fighters. However what may be surprising to hear, is that not all of that 20% is actually going towards fight purses.

Sure, that makes sense. After all, there are things like bonuses and PPV points which are accounted for. But what John Nash pointed out, when speaking with Luke Thomas, is that the UFC considers USADA drug testing to be part of that 20%.

🔊 @heynottheface explains how the UFC antitrust case has revealed that the UFC includes USADA drug testing as part of their "fighter compensation" estimates #TLTS 💰👨‍⚖️🎧@lthomasnews pic.twitter.com/oAlIH5gxjW

“I guess the only part that was new to me was that they put the medicals and drug testing as part of that. The UFC considers that compensation to fighters on their end.”

However as it is pointed out, fighters make no money from drug testing. Therefore the logical conclusion to draw is that the UFC considers this to be a service to the fighters. On the other hand, considering the fact that the athletes were not consulted before USADA drug testing was introduced, makes that hard to believe.

As for how much the UFC spends on drug testing, Nash was able to make some estimates.

“You can pretty much tell, because from 2014, other fighter costs were $9 million. In 2016, the first full year of Reebok and the drug testing, it was $21 million. That means the drug testing program is probably costing the UFC around $5 million a year. So basically every fighter on the roster – there’s what 500 fighters? Every fight could be getting $10,000 in lieu of the drug testing.”

This is fascinating information on the numbers side of the UFC. Considering other sports share as much as 50% of their revenue with their athletes, the 20% number was already bogus. However when you factor in that they include USADA drug testing into those numbers, that paints an even more bleak picture of the fighter pay situation in the UFC. 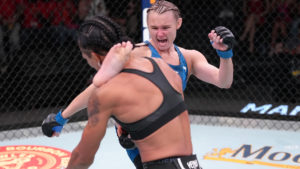