The UFC’s anti-trust lawsuit is heating up again.

The UFC anti-trust lawsuit is formed by a group of ex MMA fighters against Zuffa LLC. It charges Zuffa in regards to illegally acquiring and maintaining monopolies over Professional MMA fighters. It addition it states that the UFC uses their power to suppress fighter compensation.

Thanks to the anti-trust lawsuit, new information has pulled back the curtain on UFC operations. Witness to the Plaintiffs Hal J. Singer has conveyed a report of over 64 pages detailing numerous UFC tactics.

Jason Cruz of MMAPayout.com, highlighted various parts of the report on his “Show Money” podcast. An interesting portion of information was revealing of UFC matchmaker Joe Silva’s contract clauses in matchmaking negotiations. 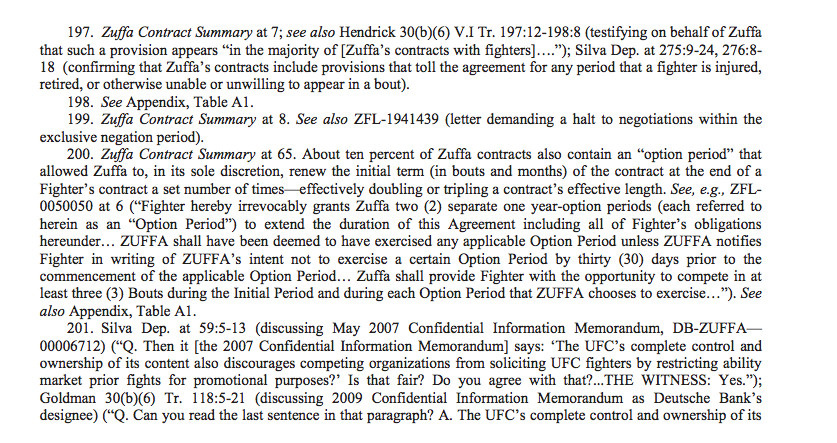 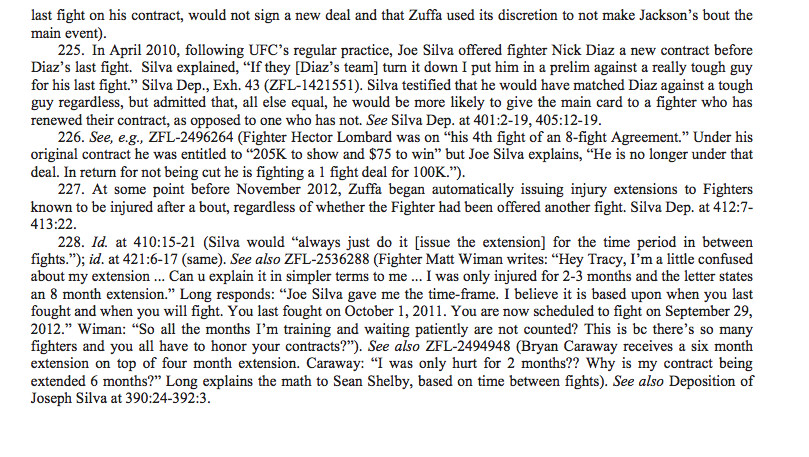 In the report, Singer claimed that the UFC automatically lengthened fighter contracts who were injured after a match. Fighters were troubled and confused by the extensions which prolong the duration of the UFC owns control over them.

Singer also reported that in addition to extended contracts due to injury, if a fighter was damaged or not willing to accept fights, about ten percent of ZUFFA contracts included an “option period.”

The option period states that Zuffa is allowed to renew the initial term of the contract (number of fights and months) at the end of a fighter’s contract (a set number of times.) Since the period is up to the discretion of Zuffa, contracts could potentially be doubled in length without the control of a fighter. Joe Silva confirmed in his testimony that the UFC had the ability to extend a fighter’s contract by 6 months if they were to turn down a fight offered to them.

In regards to an effort to re-sign Nick Diaz in 2010, Silva wrote,

Joe commented on the allegations of his deposition stating that Nick would have gotten a tough opponent regardless of re-signing.

Another contractual provision highlighted is the Champions Clause. This states that the UFC has the right to extend the contract of a fighter who is champion at any weight class at the end of their term.

While other MMA promotions share these tactics, what sets them apart is their openness to co-promote MMA events. Zuffa instead uses its marketing power and negotiation tactics to make other promotions appear as minor leagues.

Revealing this information is just the beginning of what’s to be shared in the future. You can read the entirety of the document here:

Zulfa is filthy. I hope a plaintiffs attorney takes Dana White aside from the class action and sues he and his interests personally.