UFC Sweden completely sold out within the first hour of sales

We get a fair amount of traffic from Stockholm, Sweden so if any Swedish MiddleEasy reader out there would like to lend me their sofa for the weekend of April 14th, I will happily accept. Also, you must give me a pass to raid your fridge an unlimited amount of times during those few days. Another stipulation would be that you must introduce me to a Swedish chick that looks on par (or better) than the ones on the banner picture. If you can fulfill all of the following requirements, then my head can grace your sofa cushion — and I’ll sign it for you.

According to our buds at MMAViking, UFC Sweden sold out in just one hour early this morning, and according to some MMA fans that attempted to purchase tickets, seats were gone in about 30 minutes.

It seems that the UFC’s upcoming event in Globe Arena in Stockholm was sold out in just one hour after the tickets went to public sale. According to some fans Ticnet’s customer service said that the event was sold out 30 minutes after the sales started.

UFC Fight Club members and UFC Newsletter subscribers already had their chance to buy tickets from a pre-sale on Wednesday and Thursday while the rest had to wait till Friday to get a chance to buy tickets. Fast ticket sales is just another sign that the Nordic MMA fans have been waiting for a long time for the UFC to land in the Northern Europe.

Actually, I just discovered Coachella is on that same day, so I’ll have some tough decisions to tackle in my life. Check out this screencap from Ticnet.se showing a grand total of zero tickets available for the event. 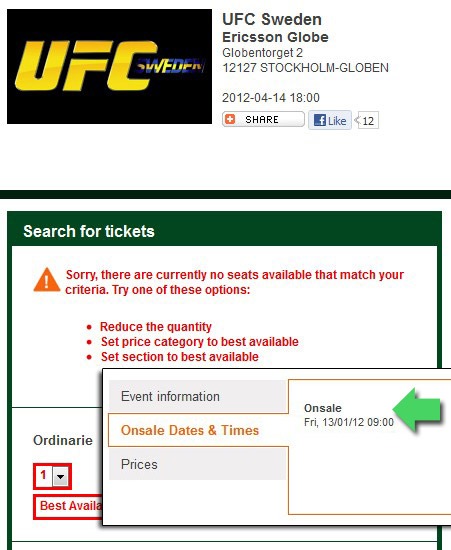