UFC has just been banned on German television 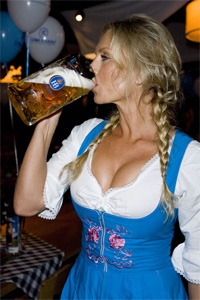 I’m sure Germany is a great country, but without UFC ,millions of guys around the country will be forced to interact with German chicks on a Saturday night instead of watching two shirtless guys in a cage mount each other. According to TVMatrix.de, the UFC has just been removed from German airwaves. Props to MMARocks_PL for the tip.

The TV portal TVmatrix reports today that the television committee has taken the Bavarian Regulatory Authority for Commercial Broadcasting (BLM) on Thursday the decision to the authorization to broadcast the UFC formats “The Ultimate Fighter,” UFC Unleashed “and” UFC Fight Night “in repeal DSF again. From now on must have the DSF, which has its headquarters in Munich to take all items for the UFC from the program.

The reasons for the decision of the television committee called the BLM that the “massiveness of the violence displayed unacceptable” and that “standing taboos” like hitting a prone opponent on the ground in contradiction with the vision of a legally supported the Bayerische Rundfunk Constitution would.

Marshall Zelaznik, managing director of international development at the UFC, chimed in on BLM’s abrupt decision to remove UFC from German television.

“We are monitoring these developments, together with our partner DSF for several weeks. Although we are not surprised that the BLM-Television Advisory Board has taken this decision, we consider it unusual that a decision has been taken on such a scale without consultation with interested parties – especially since we were about to prepare for such an appointment.

You guys remember a little event called UFC 99 which took place in Cologne, Germany? These guys, these friggin guys… [Source]