Oh, there’s another Nick Diaz article on MiddleEasy. Now let’s see who the first schmuck will be to complain about it in the comment section. Here’s a heads up random person that complains about stuff on MiddleEasy: In reality, we really don’t care. Sure you can express your belief, but in the end, it means nothing. You’re not making a significant impact on the world. No third-world children will be fed from your actions nor will people be enlightened by your opinion. You’re just spreading hate. No one cares about you, regardless of the amount of times you hop from message board to comment section and type your idiotic opinions. Contrary to popular belief, you are a unique snowflake. Unfortunately for those people that have the same IQ as a warm jar of mayonnaise, you are a snowflake that was created from the water droplets that collect around elephant dung.

Damn, this article got off to an angry start. Quick, someone give me a Disney film to watch.

Sure, I may be pissed off at the majority of the world this morning, but my anger still pales in comparison to the discontent Nick Diaz has for the Nevada State Athletic Commission. They’re the same guys that claim marijuana is a performance enhancing drug — which essentially means all of my old college roommates were genetically reversed-engineered super-human athletes.

Now Nick Diaz’s lawyer, Ross Goodman, has officially filed a complaint against the NSAC ruling on Nick Diaz testing positive for marijuana on the basis that Nick Diaz is a medical marijuana patient and the presence of marijuana metabolites isn’t prohibited under ‘out-of-competition’ circumstances. Check out the first two pages of the complaint below compliments of MMAFighting. 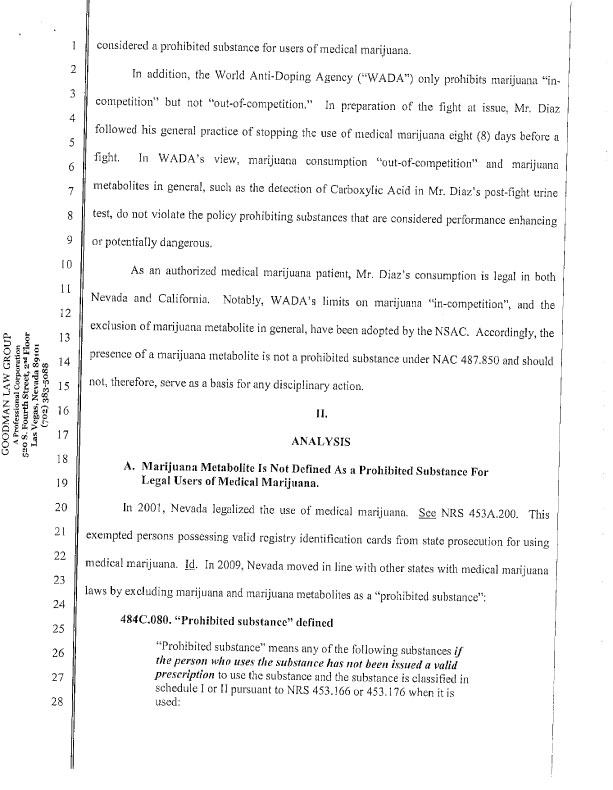