According to Thiago Tavares, Saturday was ‘the happiest day of his life’. That’s got to be mostly thanks to his big win over Spencer Fisher on his home country’s soil in front of thousands of chanting, screaming and generally amazing Brazilian fans. I can’t help but think it probably has a tiny bit to do with the warm fuzzy feeling of watching some guys he looks at as MMA fighting superheroes decisively and brutally destroy thier opponents as well.

Tatame magazine asked Thiago what his reaction was to the touching moments of UFC 134 including Nogueira knocking out Brendan Schaub, here’s what he had to say:

Rodrigo is a hero… Anderson is the best in the world, like if he was a sort of magician. We just wait for him to cast the spell. Seeing Nogueira fighting is like watching a Superman or Rocky Balboa movie. Sometimes they start losing, but then defeat the villain in the end. That’s Rodrigo. Who wasn’t there in UFC Rio missed it. It was awesome. It’s part of the history of the sport. I’ve seen great events in California, England, but UFC Rio was the most exciting event I’ve ever seen in my life.

That statement kind of gives new meaning to this picture of Tavares and Silva, like he’s standing next to his real life superhero. [source] 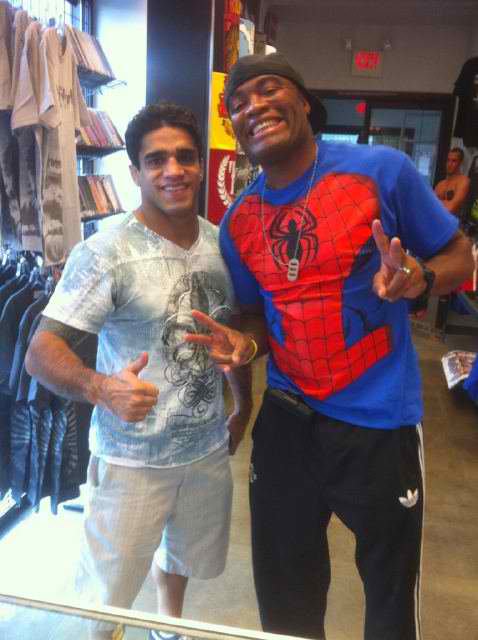