The ratings for M-1: Fedor vs. Monson may not be as high as the company claims

We live in a world where Fedor is capable of losing a fight. It’s a world most of us never thought existed back in 2009. In this new era of civilization, ketchup is the standard table condiment for filet mignon and Don Frye attends Justin Bieber concerts. In that same society, everyone traditionally wears green gloves to funerals and plays the violin in unison on the subway. If none of that makes sense to you, than neither should M-1 Global’s Fedor vs. Monson ratings, where M-1 Global president, Vadim Finkelstein, claimed the organization grabbed 7.5 million viewers during the broadcast, which was offered for free on Russian television.

According to TNS, a Russian television rating source M-1 Global: Fedor vs. Monson drew a 1.9 rating on a 6.7 fraction, where a single ratings point represents 1%, or 1,055,000 households and the fraction value represents the total number of households currently watching television at that time (regardless of which channel).

If you’re like me, and this article contains entirely too many words, here’s a picture of how Fedor vs. Monson stacked up against the top 100 television shows in the week of November 11-20, 2011. 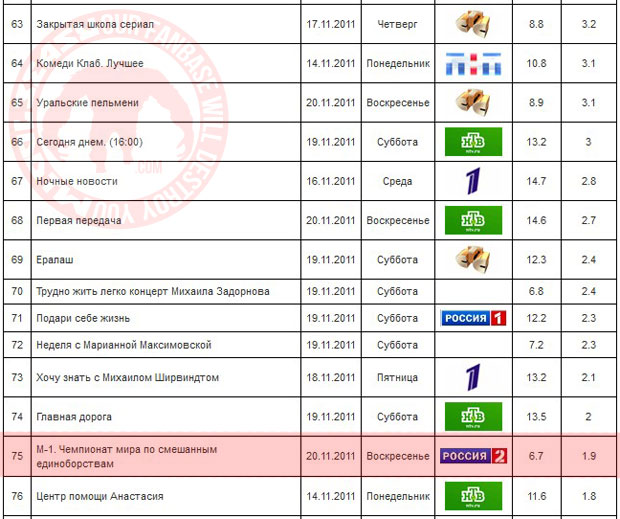 In related news, after the fight, Jeff Monson had to rip his own stitches out of his face after Russian doctors used ‘chicken wire’ to sew his mouth shut. Monson had this to say about the experience:

“Upon arrival there were ER staff smoking in the lobby. The hallways were full of wandering patients that looked like they were just out of a civil war battle. I had to fight with one of the doctors to avoid having my skull x-rayed. Eventually I got an x-ray for my leg which showed it was broken (something I already knew) and had it casted. I got 16 stitches on the inside and outside of my lip with a material that could of passed for chicken wire. It was so sharp it was making my gums bleed so I took them out myself. Saying that, the doctors were very kind and despite the inadequate medical equipment/supplies they knew what they were doing.”

We’re not sure if the Jeff Monson’s hospitalization was televised, but if it was, we’re pretty sure the 7.5 million viewers announced by M-1 wouldn’t haven been too far off. In any case, Fedor won his first fight since 2009 and the globe can slowly return to its rightful rotational axis. [Source]

Get ready for Brett Rogers vs. Tim Sylvia at DREAM’s NYE event
Read Next Post →
Click here to cancel reply.