The entire master tape library of M-1 is for sale on eBay, RIGHT NOW!

Yes, the master tapes for M-1 Global as in the only ones in existence. This morning I stumbled on an eBay listing that is so incredible, I will celebrate tonight by going to Red Lobster. MMA sites will rip this info and not even give MiddleEasy even a hint of a mention, but it’s cool. We’re used to people jacking our content. We hand out styles like ice cream cones.

An eBay listing entitled ‘M1 Global HD Cam complete library only one in existence‘ surfaced a few hours ago with a starting bid of $0.99 (and a remarkable shipping price of $49,999.01 $2,000). Check out the product description below.

“Up for bid is 171 large mouth Sony HD Cam 124 minute tapes. These tapes have one pass on them and are in EXCELLENT shape. This is the only complete completion as they are the MATER tapes for M1 Global’s 2008 and 2009 season. These are the only copies in existence, there are no others any where. These are the MASTERS without any copies! You are buying these tapes as one pass stock ties and are only buying the physical video tape itself. This does not grant the license to the footage, but since they are the only MATER tapes:) I am selling these because of non-payment for production costs. Own a piece of MMA history M1 Global’s 2008 & 2009 MASTER library!”

“Winning bidder will get a free autographed FEDOR glove.”

If anyone has has $50,000 that need to be removed from their wallets immediately, my suggestion would be to give it to me…and then if you have an extra $50,000, purchase the entire master tape library of M-1. Props for including the free Fedor glove, nice touch. Here’s a picture of one of the tapes included in the auction. 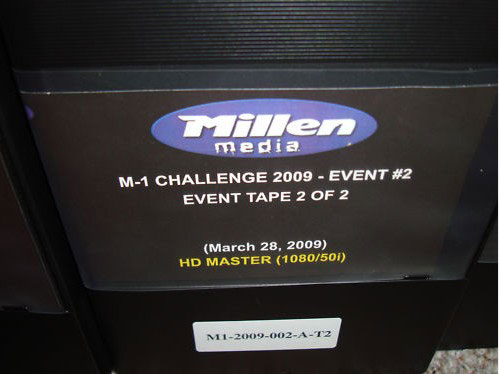 Update: I managed to track down the seller of the tapes which is former Vice President of Operations for M-1 Global, Jerry Millen. Here’s what Jerry said regarding the eBay auction:

“I left M1 and it was amicable, but there was a huge amount of money still owed to me for the M1 Series production. I was told I would be taken care of, and I never was. A portion of the money owed was supposed to be for the M1 commentators, Jimmy Smith and Sean Wheelock. They were never paid by M-1, so I paid them out of my own pocket.”

“I’m selling these tapes as a way to recoup the substantial amount of money that is owned to me. M1 didn’t pay the invoices and the past year and a half they’ve been giving me BS excuses. I know financially things aren’t well for them, but this is a complete reflection of M1. This is not aimed to hurt Fedor Emelianenko in anyway. He’s been completely mismanaged. I hate to say that Dana White is right, but he’s 100% right with most of the comments he’s made towards M-1. They unfortunately ruined Fedor’s career. Can it be salvaged? Sure. But M1 as a management company is ridiculous. You got to remember everyone at M1 left and they put Evgeni Kogan, a translator, virtually in charge of the company. Director of Operations? What is that? When we were there, we actually had revenue coming in and was producing a product. Now they have nothing coming in and it’s in complete disarray. You can’t put a translator in charge of running a company.”

For your own safety, do not con Wallid Ismail
Read Next Post →
Click here to cancel reply.