Every time we end a contest I always ask Zeus if we can rent out an old VFW hall and have a ceremony to mark the occasion. He says there is no conceivable way for that to happen once, let alone up to a dozen times a year. I’m no carpenter, but I think I can throw some black tablecloth on some card tables, create a nice little centerpiece that is tasteful yet thought provoking, then construct a stage and a lighting system that works dynamically enough for everyone to enjoy. It’s no big deal, and I’m sure the VFW has a podium we can borrow for the night. We will need a sound guy though, I refuse to do the sound.

Until then, this is yet another contest finale without a closing ceremony, sorry guys. So without further ado, I present to you the DstryrSG, FighterXFashion, MiddleEasy.com Anderson Silva Create-a-Technique contest winner and runner up!

We want to thank Rachel and her sparring partner/soulless ginger friend Liz for creating a technique that can be used not only for self defense purposes, but for fun and love. Anderson Silva would be proud. In fact, I’m sure he’s reading this right now and he is nodding in agreement. Your Anderson Silva MMA Instructional Manual and Magic Beanie are in the hands of the increasingly unreliable US Postal Service. 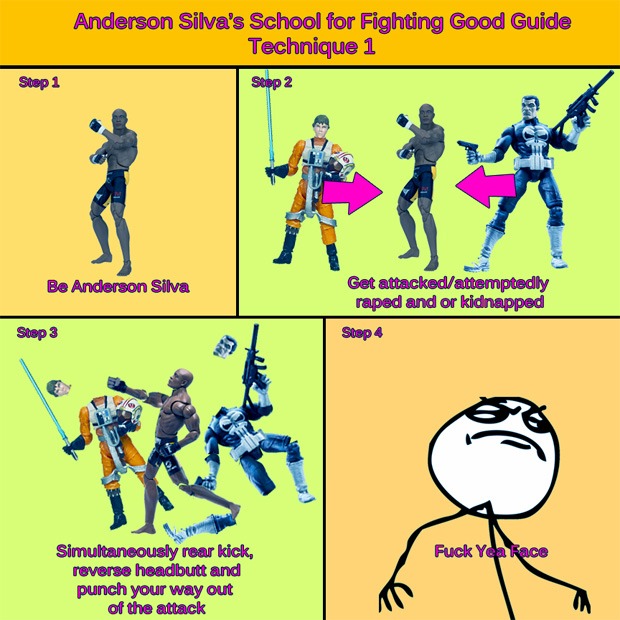 Normally we don’t condone the usage of cuss words, we don’t even swear in real life, but this step by step guide to “fight good” by IAMPhoenix was too good for us not to show you guys. Granted, step one of the technique is to be Anderson Silva, which may be difficult for some people, but this loophole was never even considered when we wrote our ten thousand word terms of service agreement for the contest. Clever, Phoenix. Clever.

WHOA! TV has been hazed and ultimately accepted to the Middleeasy Network
Read Next Post →
Click here to cancel reply.