Tatsuya Kawajiri Looks to Continue Featherweight Domination Against Donald Sanchez at One FC: War of the Lions

If you have watched Japanese MMA within the past ten years, there is a very good chance that you know Tatsuya “Crusher” Kawajiri, and that you know him well. Kawajiri was long seen as one of the top Lightweights in the world before dropping to Featherweight last year. Kawajiri makes his One FC debut at One FC: War of the Lions, in one of One FC’s most exciting debuts to date, a product of an agreement between One FC and DREAM. The only problem for Kawajiri is that he’ll be stepping into the ring with a very competent Donald Sanchez who is looking for a big win himself.

Kawajiri is a veteran in every sense of the word, his career dating back to 2000 when he stepped into a SHOOTO ring for the first time. Since then his career has spanned from SHOOTO to PRIDE to DREAM, even a trip to America to challenge Strikeforce Lightweight Champion Gilbert Melendez. When talking starpower in Japan, Kawajiri has it, one of the best known Japanese MMA fighters of this generation who has seen a lot of success. His move to Featherweight came after his loss to Gilbert Melendez, and realizing that Melendez was bigger than him, and to compete with the big international names, weight-cutting was necessary to be competitive. As a Featherweight, Kawajiri is an impressive 2-0, with wins against Joachim Hansen and Kazuyuki Miyata, two incredibly formidable opponents. 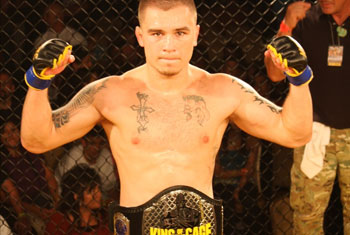 Kawajiri the Featherweight making his debut for One FC is exciting in many ways, because for Kawajiri it marks only the second time in a thirty nine fight career where Kawajiri has left Japan to fight. It also shows One FC thinking to the future by booking Kawajiri, a rare example of a Japanese fighter looking to become a name internationally and utilizing weight-cutting like so many of the top name American fighters do. Crusher Kawajiri is looking to evolve as a fighter, and he is choosing One FC to be where he continues that growth.

His opponent, though, is no slouch at all. Donald Sanchez of the United States is the current kingpin in regional promotion King of the Cage’s Bantamweight (145lbs) division. Sanchez has held that Bantamweight Championship twice now, with him being the current, reigning champion. Sanchez has fought in many promotions as well and taken on all comers, fighting in Bellator, MFC, SHOOTO and King of the Cage. There are even some parallels with Kawajiri, such as only fighting away from home once in his career so far and formerly fighting up in weight before dropping to Featherweight.

For Sanchez, this is the biggest fight of his career without a doubt. Sanchez will actually be a unique challenge for Kawajiri, coming from a wrestling background, with Kawajiri being a competent wrestler, but has struggled against American wrestlers, as we saw against Melendez and Eddie Alvarez. For Sanchez, a win over Kawajiri at One FC could help him achieve international acclaim for the first time in his seven-year career. It could also help him break a bit of a curse that he has going for him, where the last two promotions he debuted in, he suffered a loss; once in Bellator to Johnny Eduardo and once in SHOOTO to current UFC-fighter Hatsu Hioki.

Both fighters will look to make a splash in One FC at One FC: War of the Lions on March 31st in Singapore. To many, the scales are tipped in the direction of Tatsuya Kawajiri, but for Donald Sanchez, this is a huge opportunity that doesn’t always knock twice.

Take this choke for now and get back to me when your De La Riva guard is better
Read Next Post →
Click here to cancel reply.