Miesha Tate is taking her first loss since 2016 in style.

Mixed martial arts is full of ups and downs. For Miesha Tate, she has seen it all and a bit more.

The women’s MMA pioneer has been to the highest of highs and the lowest of lows. Tate has captured UFC gold, but not without enduring some tough losses to Ronda Rousey and others. Her retirement in 2016 would follow suit due to defeats against Amanda Nunes and Raquel Pennington.

Her illustrious career wouldn’t conclude after this losing streak however.

Earlier this year, ‘Cupcake’ would get some icing as she got her first UFC finish. She TKO’ed Marion Reneau in her first fight in almost 5 years.

Despite a title run being the hope, the success would be short-lived. Tate’s hype would be slowed down as she met Ketlen Vieira in the main event at UFC Vegas 43.

A close back-and-forth battle would ensue. The two women would go the distance but the former UFC Champion had not done enough to sway the judges. Vieira would take home the unanimous decision victory.

Back to square one, Tate was not found to be too upset about the loss. In fact, she seems to be taking the experience like a champ. It looks to be a fun, learning curve for her, at this stage of her career.

“Hey we had fun tonight!” Tate wrote in an Instagram story.  “I still feel like I evolved and in truth I was never tied to an outcome. Just happy to enjoy these moments.

“Thank you as always for the support and congratulations [Vieira].” 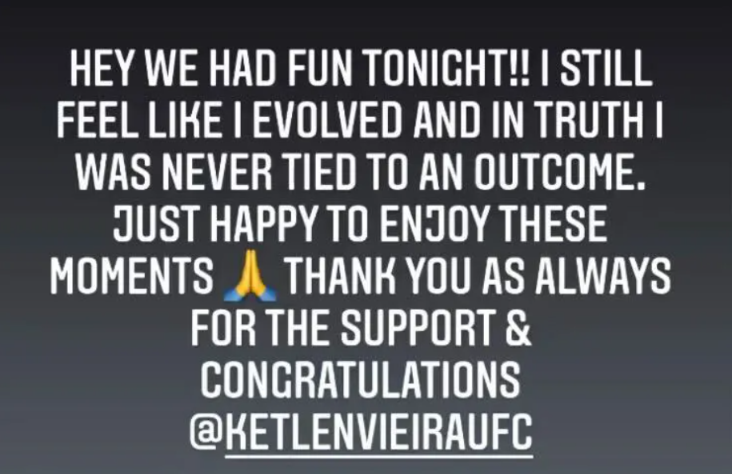 Miesha Tate is in good spirits despite a bloody, hard-fought battle against Ketlen Vieira.