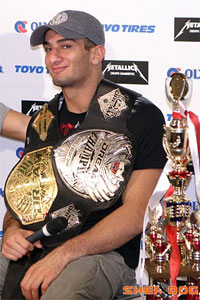 A few months after our Fedor interview, we tried to contact M-1 Global in our undying effort to get our hands on a Gegard Mousasi interview. We received a lot of emails from M-1 Global generally along the lines of ‘Gegard Mousasi is on vacation’ or ‘He’s busy at the moment, try again in a week’. Around December of 2009, we just gave up and just chalked it up as one of the many interviews we were promised, but their management just fell through *cough* Bobby Lashley, Joachim Hansen, Dan Henderson *cough*. Sherdog is now reporting that Gegard Mousasi has severed ties with M-1 Global as evidenced by an email from Mousasi.

“After careful consideration, I have decided that it is in my best interest to part ways with M-1 Global. During the time I spent under their wing, M-1 Global, as a promoter and management company, allowed me to achieve many great things. I appreciate all they have done for me.”

My management is being taken care of by someone close to me.

Both M-1 Global and Gegard Mousasi have stated that it was a business decision, not a person one. Even Fedor hopes to train with Mousasi in the near future but let’s get to the most important part of all this: the interview. Whatever happened with that? Damn. [Source]