Shane Carwin clears up his opinion on Fedor, thinks he can beat Brock

When Shane Carwin clears his thoughts, entire solar systems must rearrange. He’s one of the handful of guys in this world that pushes the earth down whenever he walks. Dude’s keeping the planet down, wtf. Liberate the earth…from Shane Carwin’s shoes. Screw saving the whales, lets save our planet from gargantuan individuals like Shane Carwin, Brock Lensar and a mythological creature/time traveling robot called Fedor Emelianenko. A couple of weeks ago Shane Carwin made a statement about Fedor that most interpreted as ‘Fedor is ducking competition’ and that ‘he’s not the best heavyweight in the world’. In an interview with Fightline.com, Carwin clears up his imaginary Fedor beef and believes that Brock couldnt get passed The Last Emperor.

I didn’t say that Fedor was fed opponents. What I said was his handlers are putting him in risky situations. You would be hard pressed to find any MMA fighter that would not have Fedor as their number 1 or 2 best fighters EVER in MMA. When you put the best fighter in the world on shows that draw a lot less then the UFC, you risk the legacy that Fedor has built if and when he loses. We are all beatable and sometimes you can have clearly won and still lost on the judges scorecard. It’s not too different then putting Hagler in with Sugar Ray, it wasn’t like Sugar Ray could have finished Hagler and the risk was the guy with all the hype could dazzle the crowd and get the win. I am not disrespecting Fedor, I am just saying the elite heavyweights are in the UFC.

I think that Fedor would beat Brock.

Now since everything is cleared, Carwin can return to his daily sparring sessions with Mechazilla and Voltron. [Source] 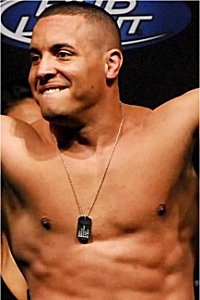 Pat Barry talks about the day he cashed his $120,000 check
Read Next Post →
Click here to cancel reply.