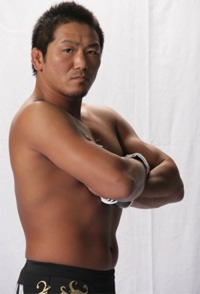 Alright, how cool is this. You get pulled over by the cops, you run away from the cops and eventually are found guilty…and then the organization you fight under apologizes for you and still lets you fight in their upcoming event. If only the NFL were this compassionate (and stop fining players for celebrating with their team after a touchdown. It is a team sport). This is what Kazuo Misaki was blessed with after he got pulled over on March 19th for using his cell phone while driving (I guess talking and driving is like just below statutory rape in Japan). Dude sped off and smashed his car’s rear view mirror against a cop’s hand. It took the cops 2 months to find Kazuo Misaki and the courts eventually found him guilty of all that fun stuff you do on Grand Theft Auto 4. Sengoku then holds an ‘apology press conference’ on behalf of Misaki and lets him fight in his upcoming bout with Kazuhiro Nakamura at the next Sengoku Event (8/2). Japan, the only place where you get rewarded for running into police.

Kazuo Misaki still sort of gets a raw deal in the end. If Kazuhiro Nakamura wins, he gets a title shot with Jorge Santiago. If Kazuo Misaki wins, dude gets nothing (besides one year in prison). Misaki has three years before he needs to serve his bid which leaves him an ample amount of time to ‘handhunt’ cops all around the city of Tokyo. [Source]